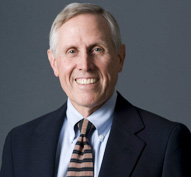 A partner in the Los Angeles office of Gibson, Dunn & Crutcher, Scott A. Kruse joined the firm in 1972 as a member of the Labor and Employment Department.  From 1977 to 1979, he served as General Counsel to the Federal Mediation and Conciliation Service, Washington, D.C., participating in the mediation of national labor disputes.  Since 1972, his labor practice has ranged the entire area of employment law matters for employers, including wage and hour matters and class actions, employment discrimination and wrongful termination litigation, employment agreements, unfair competition, affirmative action, union organizing resistance, negotiations, and arbitrations, NLRB and NMB practice, OSHA, and employee benefits.  He has had extensive experience in federal and state courts and administrative proceedings, and with alternative dispute resolution.  He spends significant time as well in counseling and preventive planning.  His representations have included, for example:

Mr. Kruse has been a member of the Committee on Equal Opportunity Law, Labor and Employment Section of the American Bar Association, serving as co-Chairman of its OFCCP Liaison Subcommittee, the ABA Airline and Railroad Labor Committee, and the International Bar Association’s Labor Committee.  He has lectured and written extensively in the area of labor and employment law, including the following publications:  “The New American Law of Wrongful Terminations” in the International Business Lawyer, “Giveback Bargaining” in the Personnel Journal, a section of a book regarding “Labor Aspects of Bankruptcy,” and an article regarding preparing for and handling OSHA inspections.  Mr. Kruse has been named as a “Best Lawyer” in employment law by The Best Lawyers in America® from 2012-2023.  He is a graduate of Princeton University and the Harvard Law School.