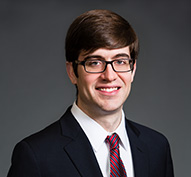 William J. Moccia is Of Counsel in the New York office of Gibson, Dunn & Crutcher.  He is a member of the firm’s Litigation Department and its Appellate and Constitutional Law Practice Group.

Mr. Moccia has represented a broad range of clients in high-stakes constitutional, commercial, and appellate litigation across numerous substantive fields, including First Amendment, takings, breach of contract, civil RICO, securities fraud, commodities manipulation, and law firm defense.  He practices in federal and state court and has plaintiff- and defense-side experience at both the trial and appellate levels.  In addition to his extensive brief-writing experience, Mr. Moccia has represented clients as “first chair” both in the courtroom and at depositions.

Among other representative matters, Mr. Moccia played a leading role in two groundbreaking victories before the United States Supreme Court.  First, he was the senior associate representing the plaintiff in The Roman Catholic Diocese of Brooklyn, New York v. Cuomo, a successful free exercise challenge to onerous State-imposed restrictions on in-person church attendance during the COVID-19 pandemic.  That representation yielded a landmark Supreme Court decision that one commentator described as “one of the two most significant religion cases of the past 30 years.”  Second, Mr. Moccia was a senior member of the team representing a group of small New York landlords and the Rent Stabilization Association of NYC, Inc. in their constitutional challenge to New York State’s COVID-19 eviction moratorium.  According to data published by Reuters, the Supreme Court’s decision granting an emergency injunction pending appeal in that case marked the first time the Court granted such relief to private litigants outside the religious liberties context since the inception of the pandemic, with nearly 100 prior applications having been denied.

Mr. Moccia was also a core member of the plaintiff-side litigation team that won a sweeping summary judgment victory in the Southern District of New York—unanimously affirmed on appeal—on behalf of Vista Outdoor Inc. in a case arising from an earn‑out dispute with the founders of stand-up paddleboard company Jimmy Styks.  On the defense side, Mr. Moccia played a pivotal role in securing complete dismissal on the pleadings of a putative securities class action brought against AmTrust Financial Services, Inc. and certain of its officers and directors under sections 11 and 15 of the Securities Act and sections 10(b) and 20(a) of the Exchange Act, despite the Company’s restatement of certain line items in its financial statements.

Mr. Moccia was included in the 2023 edition of the Best Lawyers: Ones to Watch in America™ for his work in Appellate Practice and Commercial Litigation.