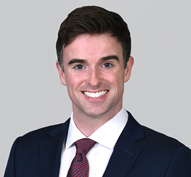 Patrick Murray is a senior litigation associate in the Los Angeles office of Gibson, Dunn & Crutcher.  He is a member of the Firm’s Intellectual Property, White Collar Defense and Investigations, and Life Sciences practice groups.  Mr. Murray represents clients in all facets of complex litigation in federal and state courts, as well as in alternative dispute resolution proceedings.  He has drafted and argued successful motions, taken and defended depositions, conducted witness interviews, and managed affirmative discovery.  He also provides prelitigation advice on a wide range of complex issues, including on pharmaceutical development agreements, trade secret disputes, and partnership obligations.

Mr. Murray has represented a broad range of clients in significant civil and criminal matters including*:

Mr. Murray also maintains a robust and wide-ranging pro bono practice.  In partnership with the San Francisco Public Defender’s Office, he overturned a client’s felony murder conviction after a retrial in San Francisco Superior Court and obtained the client’s release after over 45 years in prison.  The following year, Mr. Murray helped exonerate the same client for other serious charges for which he was wrongfully convicted.  He has also represented a coalition of residents from the Los Angeles Koreatown neighborhood in a redistricting lawsuit to redress a racially gerrymandered City Council district, and halted deportation proceedings for several indigent minors fleeing gang violence and familial abuse in Central America.

* Mr. Murray advised on these matters prior to joining Gibson, Dunn & Crutcher LLP.

Before joining Gibson Dunn, Mr. Murray worked at a leading trial and litigation boutique in San Francisco, and previously at an AmLaw 50 law firm in Los Angeles.  Mr. Murray also served as a law clerk to Chief Judge Virginia A. Phillips of the U.S. District Court for the Central District of California.

Mr. Murray earned his J.D. from the University of California, Los Angeles where he was a Senior Editor of the UCLA Law Review and a member of the UCLA Supreme Court Clinic.  Before law school he was a Post-Baccalaureate Fellow at the National Institutes of Health, where he co-authored a peer-reviewed cellular immunology publication.  Mr. Murray obtained his B.A. in Biology from Grinnell College.