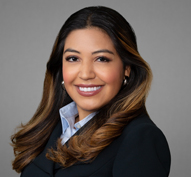 Christian (“Chris”) Celeste Nisttahuz is an associate in the Dallas office of Gibson, Dunn & Crutcher LLP. She practices in the firm’s Labor & Employment Practice Group.

Ms. Nisttahuz has represented clients in various state and federal courts, as well as in arbitration disputes. Her practice spans an array of industries, with representative experience in the financial institutions, healthcare, and construction sectors, as well as consumer class actions. She has worked on a variety of commercial disputes involving allegations of breach of contract and fiduciary duties; fraud; and violations of the Uniform Commercial Code and the Deceptive Trade Practices Act.

Prior to joining Gibson Dunn, Ms. Nisttahuz previously practiced Commercial Litigation in the Dallas office of the international law firm Norton Rose Fulbright and served as a 2016 Summer Intern for Justice Jeff Brown at the Texas Supreme Court. Ms. Nisttahuz earned her law degree from Texas Tech University School of Law in 2018, where she graduated Salutatorian and was elected to the Order of the Coif. Ms. Nisttahuz was an award-winning member and editor for the Texas Tech Law Review, a brief writer for three traveling moot court teams, and President of the Class of 2018 for two consecutive years. During her third year of law school, she also served as a student attorney in the Innocence Clinic where she gained experience in criminal law and appellate briefing.

Ms. Nisttahuz enjoys being active in her community and legal profession. She is currently a member of the 2021 Leadership Class for the Dallas Association of Young Lawyers and was previously an Associate Member of the Higginbotham Inn of Court. Ms. Nisttahuz also enjoys mentoring young individuals—from high school to law school students. Currently, she is an attorney mentor in the Leadership Council on Legal Diversity. At her previous firm, Ms. Nisttahuz served as the Co-Communications Chair for the LatinX Affinity Group, as well as a Co-Leader for the Dallas office’s Minority Lawyers Network. In her free time, she enjoys traveling and spending time with her family. Ms. Nisttahuz is a native Spanish speaker and speaks some basic French.

University of Texas - 2015 Bachelor of Arts