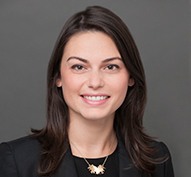 Laura Raposo is an Assistant General Counsel in the New York office of Gibson, Dunn & Crutcher.  Prior to joining the General Counsel’s office, Ms. Raposo was a member of the Firm’s Litigation Department.

Ms. Raposo has represented a diverse group of clients in a wide range of high-stakes disputes.  Her recent representations include:

Ms. Raposo is admitted to practice in the State of New York and before the United States District Court for the Southern District of New York.