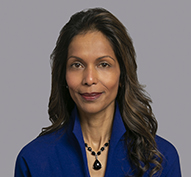 Selina Sagayam is an English qualified partner in Gibson, Dunn & Crutcher’s London office and is a leader of the firm’s Environmental, Social and Governance (ESG) Practice and a member of the firm’s Corporate Group.

Ms. Sagayam is also noted for her expertise in financial services and regulatory advice. She advises boards and senior management of international corporations, exchanges, regulators, investment banks, and financial sponsors (private equity and hedge funds) on such issues.

She has extensive experience in the City Code governing public takeovers in the UK and the European Takeovers Directive. She was seconded for two years to the Panel on Takeovers and Mergers, the key regulatory body governing public company acquisitions in the UK, and is regularly called upon as key adviser and commentator on UK and European takeovers.

Ms. Sagayam has earned a number of accolades in the course of her practice. She is recognised by The Legal 500 UK 2022 for M&A: upper mid-market and premium deals. She has been listed by Brummell Magazine for the 2018 Inspirational Women: City Pioneers and short-listed for CityLiveWire, M&A Advisors awards. She was named in the London Top 50 Women section of Super Lawyers UK 2013. She was also named in the Corporate section of The Lawyer “Hot 100” List for 2012. She was recommended as a leading lawyer in the field of Corporate/M&A by UK Legal Experts (2011-2012), recommended for Equity Capital Markets and Finance: Debt Capital Markets by Legal 500 UK 2013 and listed in the International Who’s Who of Corporate Governance Lawyers 2010 and 2011. She was recognised as a “rising star” in the 2007 edition of the Legal 500 and British daily national newspaper The Times identified her in its listing of ten “Main Players in US Firms in London” (January 8, 2008). Based on recommendations, Ms. Sagayam was included in Legal Business’ 2012 ‘Fantasy Law Firm’ of the best City corporate lawyers outside the largest UK law firms and the global elite.

Selina is a member of Gibson Dunn’s Global Diversity Committee and chairs its London Diversity, Talent & Inclusion Committee and its Community Affairs Committee. She co-chairs the cross-firm networking group for senior women in legal and compliance – NetworkforKnowledge, is a trustee of the charity Refuge (and chair of its People, Nomination and Remuneration Committee) and a member of the Advisory Boards of the think-tank Diversity UK.

She is also a member of the board of the Corporate Finance Faculty of the ICAEW, the Consulting Board of LexisPSL Corporate and the editorial board of Corporate Financier Magazine. She has recent experience serving as a non-executive director on the boards of a FTSE250 group of companies.

Ms. Sagayam is dual qualified, having started her legal career as a barrister. Prior to joining Gibson Dunn in January 2007, Ms. Sagayam practised in London in a leading international law firm for 11½ years. In addition to her secondment to the Takeover Panel, she has also undertaken a secondment to Charterhouse Bank in 1997 (Group Legal & Compliance). She holds a certificate in Sustainable Capitalism & ESG from Berkeley Law Executive Education.