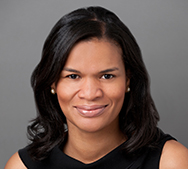 Ms. Salim-Williams has been at the firm for over a decade and played a leading role in launching the firm’s successful Women of Gibson Dunn and Black Advancement Initiatives.  Both proved to be a success, resulting in an increase of women partners and Black lawyers by over 100%.  She also actively engages in pro bono matters; most recently working in an advisory and administrative role for the Board of The Alliance for Asian American Justice, a non-profit organization created in response to the surge in anti-Asian violence across the United States.  Ms. Salim-Williams is also an active member of a number of organizations outside of the firm.  She is a Director on the New York Junior Tennis & Learning Board, as well as a founding member and advisor of the National Business Coalition for Child Care.  In addition, Ms. Salim-Williams played a leading role as a member of the Planning Committee for the George Floyd Global Memorial’s Second Annual Rise and Remember Celebration in Minneapolis, Minnesota.

Prior to joining the firm, Ms. Salim-Williams served as the Director of Diversity for the New York City Bar Association. She served as a clerk for the District Court for the Eastern District of New York, the United States Court of Appeals for the Fifth Circuit, and was an associate attorney at two global law firms.  Ms. Salim-Williams also worked as an intern for the NAACP Legal Defense and Education Fund and for the White House Office of Counsel to the President.