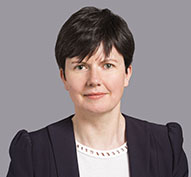 ​Deirdre Taylor is an English qualified solicitor, and is a partner in the firm’s worldwide antitrust and competition law practice group. She is based in the firm’s London office.

Some of Ms. Taylor’s recent experience in relation to cartel investigations includes defending a multi-national corporation in connection with worldwide antitrust and regulatory investigations in the financial sector and advising a client in the consumer goods sector in relation to a national, and potentially EU-wide, cartel investigation. Recent merger experience includes obtaining UK clearance in the engineering sector, UK clearance for a high-profile retail merger, and EC clearance for a merger in the electronics distribution sector.

Prior to joining Gibson Dunn, Ms. Taylor spent 5 years at the UK competition authority, most recently as Assistant Director of the Cartels and Criminal Enforcement Group. In this role, she was the project director responsible for a number of civil cartel investigations in the aviation, basic manufacturing and agricultural sectors. Ms. Taylor was responsible for the authority’s investigation into collusion between British Airways and Virgin in relation to air passenger fuel surcharges on long-haul flights. Ms. Taylor was also heavily involved in policy developments relating to the UK’s criminal cartel regime.

Prior to her time with the UK competition authority, Ms. Taylor practiced with WilmerHale from 1999 to 2008 in the Brussels and London offices, with a wide-ranging competition law, telecommunications and aviation practice. Prior to that, she served in the European Commission as Stagiaire with the Information Technology and Consumer Electronics Unit of DG Competition.

Ms. Taylor is a member of the IBA Cartels Working Group. She is assistant editor of “Faull & Nikpay: The EC Law of Competition,” one of the leading practitioner texts in the antitrust and competition law field.

Civil cartel investigations, from initial leniency applications and ‘dawn raids’, through the investigative stages to final decision, including settlement. In particular, responsibility for the investigation into collusion between BA and VAA in relation to air passenger fuel surcharges and settlement with BA. Representation of a multi-national corporation in connection with worldwide antitrust and regulatory investigations in the financial sector.

In-depth experience of aviation regulation, including an in-depth study for the European Commission on airspace regulation. Ms. Taylor was also heavily involved in advising a major European airline association concerning the implications of the European Court of Justice’s “Open Skies” judgments and in preparing a report and paper outlining the association’s position on key competition law aspects of the proposed EU-US Transatlantic Open Aviation Area. Other aviation work includes behavioural advice and merger filing advice for a number of international airlines.