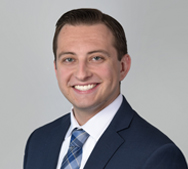 Nick Thomas is an associate in the Orange County office of Gibson, Dunn & Crutcher, where he currently practices in the firm’s Litigation Department.