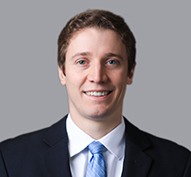 Trenton Van Oss is a litigation associate in the Washington, D.C. office of Gibson, Dunn & Crutcher.

Mr. Van Oss has experience across a range of complex litigation areas, including class actions, state and federal government investigations, and appellate litigation.  He has also assisted clients with internal investigations and reviews, as well as managed document review teams and overseen witness preparation.

Mr. Van Oss clerked for Justice Brett Kavanaugh on the Supreme Court of the United States, Judge Britt Grant on the U.S. Court of Appeals for the Eleventh Circuit, and Judge Dabney Friedrich on the U.S. District Court for the District of Columbia.  Prior to clerking, Mr. Van Oss was a litigation associate in Gibson Dunn’s Denver office.  He graduated magna cum laude from Harvard Law School, where he was the Supreme Court Co-Chair of the Harvard Law Review and published two scholarly pieces with the Review.  Mr. Van Oss was a member of the winning team of the 2016 Ames Moot Court Competition, the President of the Harvard Federalist Society, and a student attorney and supervisor in the Harvard Prison Legal Assistance Project.  While at Harvard, he also received the Dean’s Award for Community Leadership.

Mr. Van Oss is admitted to practice law in the District of Columbia.