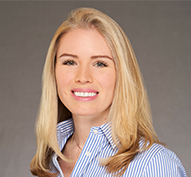 Sophia (Vandergrift) Hansell, is a partner in the Washington, D.C. office of Gibson, Dunn and Crutcher.  She is a member of the Antitrust and Competition Practice Group.  Before joining the firm, Ms. Hansell served as an attorney in the Mergers IV Division of the Federal Trade Commission’s Bureau of Competition, where she focused on merger review and enforcement litigation.

At the FTC, Ms. Hansell was a core member of trial teams that blocked proposed mergers for Sysco and US Foods, Advocate Health Care and NorthShore University HealthSystem, and Wilhelmsen and Drew Marine.  Previously, Ms. Hansell served in the United States Attorney’s Office for the District of Columbia as a Special Assistant United States Attorney in the General Crimes Division.  She also was a special counsel at another law firm.

Leveraging her experience in government enforcement, Ms. Hansell’s practice focuses on complex antitrust litigation and investigations before the Department of Justice, Federal Trade Commission, and state attorneys general.  She also has experience counseling companies on a broad range of competition issues relating to M&A transactions, including pre-deal risk assessments, transaction negotiations, and gun jumping issues. Ms. Hansell also develops and executes strategies to secure merger clearance with U.S. and foreign competition authorities. She was named a “Rising Star” in Antitrust and Competition by IFLR in 2021 and by Euromoney Legal Media Group in 2020.

Ms. Hansell is admitted to practice in Virginia and the District of Columbia.