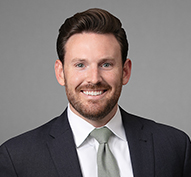 Pat Vickery is an associate in Gibson, Dunn & Crutcher’s Dallas office. He practices in the firm’s Litigation Department.

Before joining Gibson Dunn, Mr. Vickery served as a law clerk to the Honorable Edith Brown Clement of the United States Court of Appeals for the Fifth Circuit and the Honorable Amos L. Mazzant III of the United States District Court for the Eastern District of Texas.  Mr. Vickery received his J.D. with honors from the University of Texas School of Law, where he served as a Featured Content Editor for the Texas Law Review.  He also served as a Teaching Quizmaster for Texas law’s legal research and writing program.  Mr. Vickery received a Bachelor of Science degree in Mathematics from Texas Christian University.