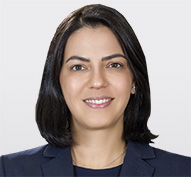 Renad Younes is Partner-in-Charge of the Abu Dhabi office of Gibson, Dunn & Crutcher, and a member of the Projects and Infrastructure and Mergers and Acquisitions Practice Groups.

Ms. Younes advises corporations, financial institutions and governments on local and international M&A transactions and projects that cover a wide range of sectors, including energy and infrastructure. She leads her clients through complex M&A processes, as well as energy and infrastructure greenfield project development, in the renewables, transitional energy, upstream, midstream, downstream and LNG sectors.

Ms. Younes’ deep sector and industry knowledge and combination of M&A and project development experience enables her to also frequently advise on complex carve-outs that are followed by IPOs, equity offerings and debt offerings where her industry knowledge is applied to structure the relevant assets and interests to achieve successful and strategic capital raisings. Known for her innovation and solution-oriented approach in the energy sector, she also has an extensive track record assisting clients in setting up innovative and agenda setting projects and legal structures, including market facing trading companies and first in kind transitional energy companies.

Ms. Younes is listed and top ranked by Chambers and Legal 500 in both M&A and energy categories, and is listed in the “Hall of Fame” (the only lawyer listed in that category) for UAE Oil, Gas and Natural Resources by Legal 500 EMEA 2022. She was named on IFLR 1000’s Women Leaders 2022 list of “highly regarded” lawyers worldwide.

Ms. Younes received her LLM in Public International Law from the London School of Economics. Prior to that, she received her LLB and her BSc in Science and Biology from the University of Jerusalem. Her primary languages are Arabic and English. Ms. Younes regularly writes and speaks on topics relating to energy, transitional energy and infrastructure, and is also an advocate for diversity and inclusion in the legal profession.