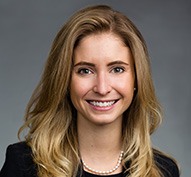 Ms. Aycock has represented multinational companies and senior executives in a variety of industries (including technology, media, entertainment, and banking/finance) in complex commercial litigation, crisis management, and regulatory and white collar defense and investigations.  She has particular expertise helping clients navigate complex legal matters involving a confluence of legal actions and inquiries—for example, from regulators, prosecutors, public representatives, and private plaintiffs—all at once.  Substantively, her practice is cross-disciplinary and includes experience in consumer protection, data privacy, contract, employment, constitutional, antitrust, and criminal law; she is a Certified Information Privacy Professional (CIPP/US).

The Legal 500 has twice recognized Ms. Aycock as a “Rising Star” in corporate investigations and white collar criminal defense, and recommends her for matters involving privacy, cybersecurity, and consumer protection, and for white collar matters emanating from the technology, media, and entertainment industries.  She has also been recognized four times by The Best Lawyers in America® as “One to Watch” in Criminal Defense: White-Collar (2020, 2021, 2022, 2023).

Ms. Aycock maintains an active pro bono practice.  For example, she represented Migrant Justice—a Vermont non-profit dedicated to protecting the rights of the migrant farmworker community—in a lawsuit against the federal and local government that alleges unlawful surveillance and harassment in violation of the First Amendment.  A team of Gibson Dunn attorneys, including Ms. Aycock, engaged in a deep dive into policing throughout the United States as contributing authors to “New Era of Public Safety: A Guide to Fair, Safe, and Effective Community Policing,” a comprehensive report and toolkit completed in collaboration with the Leadership Conference on Civil Rights. In a blog post entitled “How to Make this Moment the Turning Point for Real Change,” President Obama referenced and linked to the Report.  Ms. Aycock sits on the Junior Advisory Board of Her Justice, a non-profit that provides free legal services to women living in poverty in New York City to address individual and systemic legal barriers.

Ms. Aycock is admitted to practice in the State of New York, and before the United States District Courts for the Southern and Eastern Districts of New York.

University of Pennsylvania - 2007 Bachelor of Arts