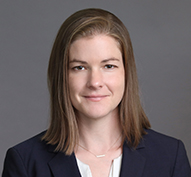 Elizabeth A. Dooley is a senior associate in the San Francisco office of Gibson, Dunn & Crutcher LLP.  Her practice primarily focuses on appellate and employment matters.  She is a member of the Firm’s Hiring Committee.

Ms. Dooley has also represented pro bono clients in a variety of matters, including in three Ninth Circuit appeals and in several amicus briefs and briefs in opposition to certiorari submitted to the United States Supreme Court.  In 2018, she argued before the Ninth Circuit and secured reversal of an agency determination that had denied her client protection under the Convention Against Torture.  On remand, she obtained the release of her client—six years after he had first been detained—along with a grant of protection under the Convention Against Torture, permitting him to remain in the United States.

Ms. Dooley earned her J.D. from Stanford Law School in 2013, where she was a member of the Stanford Supreme Court Litigation Clinic and the Stanford Community Law Clinic.  While in the Supreme Court Litigation Clinic, Ms. Dooley was part of the four-student team that worked on United States v. Windsor, 570 U.S. 744 (2013), Edith Windsor’s successful challenge to the constitutionality of the Defense of Marriage Act, for which the Clinic served as co-counsel to Ms. Windsor.  Ms. Dooley also served as co-president of the law school’s LGBT organization at Stanford.

Ms. Dooley currently serves on the Leadership Development Committee of the Northern California chapter of the Association of Business Trial Lawyers.  She previously served on the boards of the Aids Legal Referral Panel and Stanford Pride, Stanford University’s LGBT alumni organization.