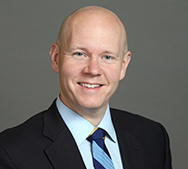 Ben Imdieke is an associate in the San Francisco office of Gibson, Dunn & Crutcher, where he serves as a member of the firm’s Real Estate Department.  Mr. Imdieke’s experience includes a broad variety of finance, joint venture, workout and development matters, and he has represented landlords and tenants in large scale, often complex, office and industrial leasing transactions including negotiations for tech industry campuses of up to 750,000 RSF and ancillary property management-related transactions.

He earned an M.A. in Philanthropic Studies from Indiana University, where he was a Jane Addams-Andrew Carnegie Fellow, and his B.A. in Political Science from Kalamazoo College.  Prior to attending law school, Mr. Imdieke was a non-profit fundraising executive and a capital campaign consultant for various philanthropic, educational, environmental, social service, arts and culture and health care organizations.

Mr. Imdieke is admitted to practice law in the States of California and Minnesota.