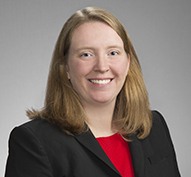 Ashley E. Johnson is a partner in the Dallas office of Gibson, Dunn & Crutcher.  She practices in the firm’s Labor and Employment, Appellate and Constitutional Law, Litigation, and Antitrust and Competition practice groups.

Ms. Johnson has a wide-ranging commercial dispute practice in trial and appellate courts across Texas and around the country.  She focuses her practice at both the trial and appellate level on the legal strategy, briefing, and argument of complex legal issues across an array of subjects, particularly including ERISA disputes (primarily class actions), cutting-edge antitrust questions, class certification motions, and constitutional issues.  She works with her clients on crafting the most persuasive written presentation on their most critically important and complicated briefs and on communicating those arguments to courts in oral hearings.  A former Supreme Court clerk, Ms. Johnson has argued in the United Courts of Appeals for the Fifth, Seventh, and Ninth Circuits, as well as multiple Texas appellate courts.  In addition, she has briefed a diverse set of cases in the United States Supreme Court, including high-profile victories in Murphy v. National Collegiate Athletic Association (U.S. 2018), Bank Markazi v. Peteson (U.S. 2016), and Black v. United States (U.S. 2011).

Prior to joining Gibson Dunn, Ms. Johnson served as a law clerk to Justice Clarence Thomas of the Supreme Court of the United States, and to Judge J. Michael Luttig, formerly of the United States Court of Appeals for the Fourth Circuit.  Ms. Johnson earned her law degree in 2004 from Vanderbilt University Law School, where she was a John W. Wade Scholar and Editor-in-Chief of the Vanderbilt Law Review. Ms. Johnson was awarded the Archie B. Martin Memorial Prize and the Robert F. Jackson Memorial Prize for placing first in her class in her first and second years of study. She was also elected to Order of the Coif.  Ms. Johnson graduated from Vanderbilt University with a Bachelor of Science Degree in Mathematics and History while earning membership in Phi Beta Kappa.

Ms. Johnson is also actively involved in alumni activities at Vanderbilt University Law School, where she is a member of the Vanderbilt Law Review Alumni Board of Advisors.  She has spoken through the Branstetter Litigation and Dispute Resolution Program at Vanderbilt regarding the practice of appellate law and brought Supreme Court Justice Clarence Thomas to Vanderbilt to deliver the 2014 Cecil Sims Lecture.