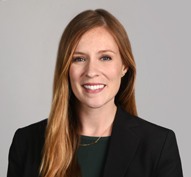 ​Madeleine McKenna is a litigation associate in Gibson, Dunn & Crutcher’s Los Angeles office.  She practices in the firm’s Insurance, Class Actions, Labor and Employment, and Appellate and Constitutional Law Practice Groups, with a focus on complex civil litigation in the trial courts and on appeal.

Ms. McKenna has represented clients in a variety of high-stakes, complex litigation matters in state and federal courts, with a particular focus on class and representative actions involving employment and consumer protection claims.  She has also litigated a wide variety of appellate matters.

Ms. McKenna earned her law degree from Stanford Law School, where she served as an articles editor for the Stanford Law Review and a teaching assistant for evidence and the first-year writing course.  While a student in Stanford’s Environmental Law Clinic, she argued before the Ninth Circuit Court of Appeals and obtained reversal of the district court’s decision denying her pro bono client’s request for attorneys’ fees.  She graduated Phi Beta Kappa from the University of Washington, where she also served as student body president.  Prior to joining Gibson Dunn, Ms. McKenna clerked for the Honorable Richard C. Tallman of the U.S. Court of Appeals for the Ninth Circuit.  She is admitted to the State Bar of California and the Third and Ninth Circuit Courts of Appeals.

University of Washington - 2011 Bachelor of Arts