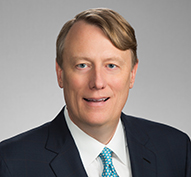 Doug Rayburn is a partner in the Dallas and Houston offices of Gibson, Dunn & Crutcher and a member of the firm’s Capital Markets, Energy & Infrastructure, Mergers & Acquisitions, Global Finance, Private Equity and Securities Regulation & Corporate Governance practice groups.  His principal areas of concentration are securities offerings, mergers and acquisitions and general corporate matters.  He has represented issuers and underwriters in over 200 public offerings and private placements, including initial public offerings, high yield offerings, investment grade and convertible note offerings, offerings by master limited partnerships (MLPs), and offerings of preferred and hybrid securities.

Mr. Rayburn has been consistently ranked in Texas Capital Markets Debt & Equity by Chambers USA, with sources noting him as “an outstanding lawyer who is as good as it gets.” and “he knows his stuff and works hard to find compromises to divisive issues. Doug is a true gentleman who is invariably pleasant to work with.” He has also been widely recognized, including The Legal 500 U.S. (2013), The Best Lawyers in America® (2008-2022), and Texas Super Lawyer (2006-2022).