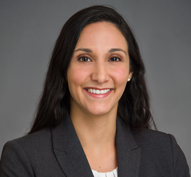 Erica Sollazzo Payne is an associate in the New York office of Gibson, Dunn & Crutcher.  She is a member of the Firm’s Litigation Practice Group.

Ms. Payne’s practice focuses on a broad range of high-stakes trial and appellate litigation.  Highlights include obtaining the dismissal of all shareholder derivative and federal securities claims brought against a major hospitality company in the wake of a cybersecurity incident; prevailing before the New York Court of Appeals in UBS v. Kainer, which presented a question of first impression and adopted new law of civil procedure in New York; obtaining a unanimous appellate victory dismissing a whistleblower retaliation lawsuit; and serving on a trial team in a three-week, multi-billion-dollar jury trial in New York State Supreme Court.

Before joining Gibson Dunn, Ms. Payne clerked for the Honorable Raymond J. Lohier, Jr. of the United States Court of Appeals for the Second Circuit.