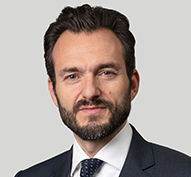 Robert Spano is Of Counsel in the London office of Gibson, Dunn & Crutcher where he is a member of the firm’s Dispute Resolution Practice Group. He is the former President of the European Court of Human Rights. Mr. Spano joined Gibson Dunn in London following the end of his judicial term.

As a former judge and President of an international court, Mr. Spano offers clients a unique perspective on multi-national and cross-border disputes, particularly in the fields of investor-state and commercial arbitration, public international law, digital rights, tech, platform regulation and privacy. He also advises on the law of the European Convention on Human Rights, business and human rights, ESG (environment, social and governance), and on EU government affairs and public policy. Having adjudicated complex disputes between individuals/legal persons and States, and in State-to-State proceedings, including conflict cases (Ukraine v Russia (re Crimea) (2020) and Georgia v Russia (II) (2021)), his broad international experience allows him to offer clients invaluable skills and strategic insights. Mr. Spano sits on the Panel of Arbitrators and Conciliators of the World Bank’s International Centre for Settlement of Investment Disputes (ICSID).

Mr. Spano took part in deciding some of the landmark cases in the European Court of Human Rights on the right to property and the right to a fair trial, including Mamatas and Others v Greece (2016), Al-Dulimi and Montana Management Inc. v Switzerland (2016), Lekic v Slovenia (2018) and Albert and Others v Hungary (2020), as well as cases in the field of digital rights, government mass surveillance, national security, online content moderation and freedom of expression, such as Delfi v Estonia (2015), Lópes Ribalda and Others v Spain (2019), Magyar Kétfarkú Kutya Párt v Hungary (2020), Big Brother Watch and Others v the United Kingdom (2021), Centrum för Rattvisa v Sweden (2021) and NIT S.R.L. v the Republic of Moldova (2022).

Mr. Spano was a tenured Professor of Law and Dean of the Faculty of Law, University of Iceland. He practiced as a part-time Of Counsel for a law firm in Iceland and in London in the fields of public law and corporate law. He was provisionally appointed Parliamentary Ombudsman in 2013 before being elected a judge on the European Court of Human Rights. He served as President of the European Court of Human Rights from 18 May 2020 to 31 October 2022.

Mr. Spano graduated with a Candidatus Juris degree from the University of Iceland in 1997, studied European Law and International Trade Law at the University of Leuven, and was awarded a Magister Juris degree with Distinction in European and Comparative Law from the University of Oxford (University College) in 2000. At Oxford, he was awarded the Clifford Chance Prize (proxime accessit) and the Civil Procedure Prize for his scholastic achievements. He has published extensively in the fields of international dispute resolution, public international law, on digital rights and human rights law. He is a frequent public speaker on these topics and has given lectures in the fields of international arbitration and business and human rights (ESG).

He speaks five languages, English, French, Italian, Danish and he is a native Icelandic speaker.