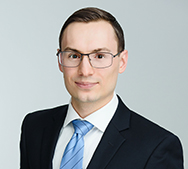 Daniel Strellman is a litigation associate in the New York office of Gibson, Dunn & Crutcher.

Mr. Strellman joined the firm after serving as a law clerk to the Honorable Joe B. McDade of the United States District Court for the Central District of Illinois.

In 2016, Mr. Strellman earned a bachelor’s degree in philosophy and sociology from Duke University, where he received both the Mark D. MacFarlane and MacAnderson Scholarships and was repeatedly included on the Dean’s List.

Mr. Strellman is admitted to practice law in the State of New York.