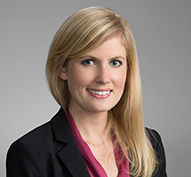 Rachel Robertson is an associate in the Dallas office of Gibson, Dunn & Crutcher LLP.  She practices in the firm’s Litigation Department.

Prior to joining Gibson Dunn, Ms. Robertson was a law clerk for the Honorable Sidney A. Fitzwater of the United States District Court for the Northern District of Texas.  During her clerkship, Judge Fitzwater sat by designation on the Fifth Circuit Court of Appeals, pursuant to which Ms. Robertson assisted the Judge in hearing appeals from various federal district courts.

Rachel has been recognized by The Best Lawyers in America© as “Ones to Watch” in Commercial Litigation (2023).

Ms. Robertson received her law degree from the University of Virginia School of Law, where she was the Notes Development Editor and a member of the Executive Board of the Virginia Law Review.  While in law school, Ms. Robertson participated in the Appellate Litigation Clinic and won an immigration appeal in the Fourth Circuit.  She also was elected to The Raven Society, served as the President of the Unified Journal Tryout, and was awarded a Dillard Fellowship on the basis of a legal editing and writing competition. Ms. Robertson graduated with highest honors from the University of Texas at Austin with a Bachelor of Arts degree in Government and History.  She is a member of Phi Beta Kappa.

Before law school, Ms. Robertson taught in Houston as a Teach For America corps member, and she was named a semi-finalist for the Sue Lehmann Excellence in Teaching Award.

Ms. Robertson is admitted to practice in the State of Texas.

University of Texas - 2010 Bachelor of Arts