Our survey covers 46 total public activist actions, involving 36 different activist investors and 39 companies targeted, during the period from July 1, 2017 to December 31, 2017. Six of those companies faced advances from multiple investors, including three companies that faced coordinated actions by activist groups. Equity market capitalizations of the target companies ranged from just above the $1 billion minimum covered by this survey to approximately $235 billion. 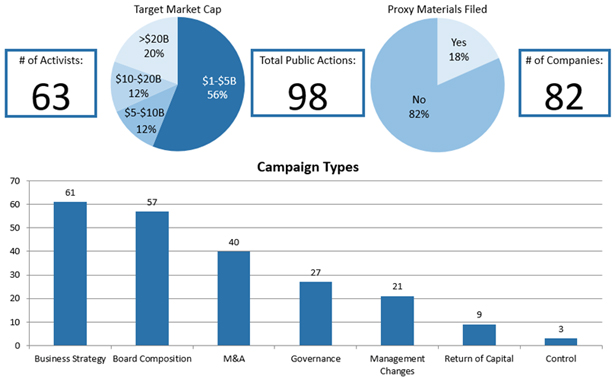 In the second half of 2017, activists most frequently sought to influence target companies’ business strategies (63.0% of campaigns), while changes to board composition and M&A-related issues (including pushing for spin-offs and advocating both for and against sales or acquisitions) were sought in 41.3% and 34.7% of campaigns, respectively. Changes to corporate governance practices (including de-staggering boards and amending bylaws) (23.9% of campaigns), changes in management (10.9% of campaigns), and requests for capital returns (10.9% of campaigns) were relatively less common. Seven campaigns involved proxy solicitations during the second half of 2017, five of which reached a vote. Finally, activism was most frequent among small-cap companies (64.1% of companies targeted had equity market capitalizations below $5 billion). More data and brief summaries of each of the activist actions captured by our survey follow in the first half of this publication.

The most notable change from prior periods surveyed is the decrease in publicly filed settlement agreements, as our survey captured only four such agreements in the second half of 2017, compared to 12 in the first of 2017 and 13 in the second half of 2016. The decline in publicly filed agreements may be partially attributable to the decrease in the percentage of actions in which activists sought board seats. Though certain key terms of settlement agreements, including standstills, voting agreements, ownership thresholds and non-disparagement agreements, remain nearly ubiquitous, we think it is notable, despite the small sample size, that all four agreements covered in this edition of Activism Update included expense reimbursement provisions, which had been on the decline during prior periods.

We hope you find Gibson Dunn’s 2017 Year-End Activism Update informative.  If you have any questions, please do not hesitate to reach out to a member of your Gibson Dunn team.