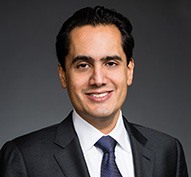 Eduardo Gallardo is a partner in the New York office of Gibson, Dunn & Crutcher.  Mr. Gallardo is Co-Chair of the Mergers and Acquisitions Practice Group and is Chair of the Shareholder Activism Defense Group.  He focuses his practice on mergers and acquisitions, shareholder activism defense and corporate governance matters.

Mr. Gallardo is tier-ranked by Chambers USA in Corporate/M&A: Takeover Defense, with clients noting he is “very responsive, timely and an effective negotiator.”  Mr. Gallardo has been named a “Dealmaker of the Year” by The American Lawyer.  The National Law Journal has also named him among its Mergers & Acquisitions and Antitrust Trailblazers – people “who have moved the needle in mergers and acquisitions and antitrust law.”  He is also recognized as one of the Lawdragon 500 Leading Dealmakers in America and as a leading M&A attorney by The International Financial Law Review.

Mr. Gallardo received his Juris Doctor from Columbia Law School in 1999, where he was a Harlan Fiske Stone Scholar.  He received a Bachelor of Arts from Cornell University in 1996.  Mr. Gallardo is admitted to practice in the State of New York.