This Client Alert provides an update on shareholder activism activity involving NYSE- and NASDAQ-listed companies with equity market capitalizations above $1 billion during the first half of 2018.  After a modest decline in activist activity in the second half of 2017, activism resumed a torrid pace during the first half of 2018.  Compared to the same period in 2017, which had previously been the most active half-year period covered by any edition of this report, this mid-year edition of Gibson Dunn’s Activism Update reflects a further increase in public activist actions (62 vs. 59) and companies targeted by such actions (54 vs. 50).

In this edition of the Activism Update, our survey covers 62 total public activist actions, involving 41 different activist investors targeting 54 different companies.  Eight of those companies faced activist campaigns from two different investors, and five of those situations involved at least some degree of coordination between the activists involved.  Nine activist investors were responsible for two or more campaigns between January 1, 2018 and June 30, 2018, representing 30, or nearly half, of the 62 campaigns covered by this report. 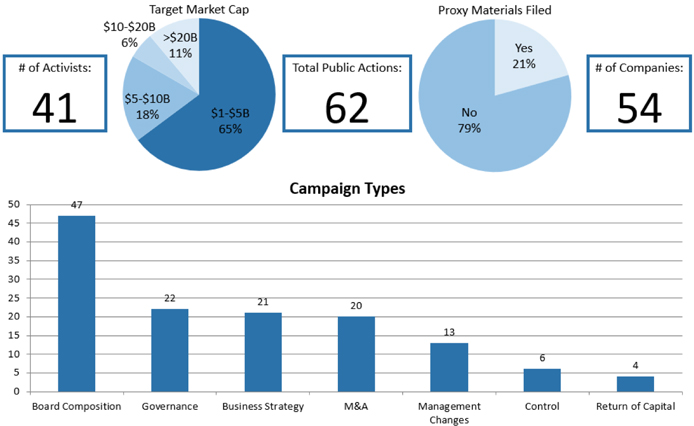 *All data is derived from the data compiled from the campaigns studied for the 2018 M Activism Update.

While changes in business strategy were the top goal of activist campaigns covered by Gibson Dunn’s Activism Update for the second half of 2017, changes to board composition have returned to prominence in the first half of 2018 (75.8% of campaigns), coinciding with a dramatic uptick in publicly filed settlement agreements during the same period.  Activists pursued governance initiatives, sought to influence business strategy, and took positions on M&A-related issues (including pushing for spin-offs and advocating both for and against sales or acquisitions) at nearly equal rates, representing 35.5%, 33.9%, and 32.3% of campaigns, respectively.  Demands for management changes (21.0% of campaigns), attempts to take control of companies (9.5% of campaigns), and requests for capital returns (6.1% of campaigns) remained relatively less common goals of activist campaigns over the first half of 2018.  The frequency of activists filing proxy materials remained relatively consistent with periods covered by recent editions of this report, with investors filing proxy materials in just over one in five campaigns.  While market capitalizations of target companies ranged from this survey’s $1 billion minimum threshold to $100 billion, activists’ focus remained largely on small-cap companies with market capitalizations below $5 billion, which represented 64.8% of the 54 target companies captured by our survey.

We hope you find Gibson Dunn’s 2018 Mid-Year Activism Update informative. If you have any questions, please do not hesitate to reach out to a member of your Gibson Dunn team.