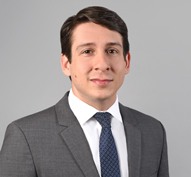 Alex Mircheff is a partner in Gibson Dunn’s Los Angeles office.  His practice emphasizes securities and appellate litigation, and he has substantial experience representing issuers, officers, directors, and underwriters in class action and shareholder derivative matters.

Multiple of Mr. Mircheff’s wins in stockholder class actions have been recognized as “Defense Verdict of the Year” by publications including The Recorder and Los Angeles Daily Journal.  Those matters include dismissals of claims for hundreds of millions of dollars against Herbalife; and against Arrowhead Research Co., where Mr. Mircheff was lead counsel at the trial court and on appeal.

Mr. Mircheff is recognized by Chambers USA as an Up and Coming lawyer in Securities Litigation and was selected by his peers for inclusion in the 2023 edition of The Best Lawyers in America© in the area of Securities Litigation. He has been named a “Rising Star” by the Southern California “Superlawyers” edition of Los Angeles Magazine and a “Next Generation Lawyer” by Legal 500 in the area of M&A: Litigation Defense.  Before joining the firm, Mr. Mircheff served as a law clerk to the Honorable Cynthia Holcomb Hall of the United States Court of Appeals for the Ninth Circuit and to the Honorable Gary A. Feess of the United States District Court for the Central District of California.

Mr. Mircheff is admitted to practice before the Supreme Court of the United States, the U.S. Courts of Appeals for the Seventh, Eighth, and Ninth Circuits, and all California federal and state courts.

Mr. Mircheff is also a past Chair of the Board of Directors for California YMCA Youth & Government, a statewide organization with a mission of promoting civic engagement and character development in high school and middle school students.