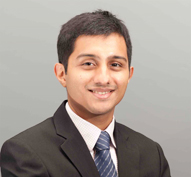 Karthik Ashwin Thiagarajan is an associate attorney in the Singapore office of Gibson, Dunn & Crutcher LLP.  He focuses on mergers and acquisitions, joint ventures and corporate restructuring matters in India and Southeast Asia.

Mr. Thiagarajan has assisted companies and investors across a variety of industries, including the information technology, fin-tech, telecommunication, logistics and consumer goods sectors.  He has also advised clients on several cross-border restructuring matters in Southeast Asia.

In addition to his mergers and acquisitions experience, Mr. Thiagarajan also advises clients on internal investigations and anti-corruption reviews in the region.  In the recent past, Mr. Thiagarajan has assisted clients with investigations in the financial services, information technology, electronics and fast-moving consumer goods sectors in India and Southeast Asia.

Prior to joining Gibson Dunn, Mr. Thiagarajan worked as an international lawyer with Drew & Napier (2006-2011), a leading law firm in Singapore, where he assisted with technology, media and telecommunications, cross-border restructuring, mergers and acquisitions and joint venture transactions in Southeast Asia and India.

Mr. Thiagarajan received his LL.M. from Harvard University in 2009.  He graduated from law school (B.A., LL.B. (Hons.)) from National Law School of India University, where he served as the Chief Editor of the Indian Journal of Law and Technology.  Mr. Thiagarajan served as a law clerk to Justice Ruma Pal of the Supreme Court of India between 2005 and 2006.

Mr. Thiagarajan is admitted to practice in India and New York.  He speaks English, Hindi, Tamil and Kannada.