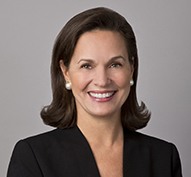 Helgi Walker is a partner in Gibson, Dunn & Crutcher’s Washington, D.C. office.  She is Co-Chair of the firm’s global Litigation Practice Group and a member of the firm’s Executive Committee.  She is also Co-Chair of the Administrative Law and Regulatory Practice Group and a member of the Appellate and Constitutional Law Group.  Chambers USA describes her as “dynamite in the courtroom and a forceful oral advocate,” “a brilliant legal mind,” and counsel with “excellent judgment” and “a reputation for excellence.”  In its 2020 competition, The American Lawyer named Gibson Dunn the winner of the Litigation Department of the Year contest and a finalist in the White Collar/Regulatory category that includes her practice areas.

Ms. Walker’s work focuses on appellate, regulatory and complex litigation matters.  She has extensive experience in appellate challenges to agency rulemakings and in other high-stakes commercial litigation.

Ms. Walker was elected as a Fellow of the American Academy of Appellate Lawyers, which is limited to 500 lawyers nationwide.  By appointment of the U.S. Court of Appeals for the D.C. Circuit, Ms. Walker serves as the Chair of the Court’s Advisory Committee on Procedures.  She also  is a member of the U.S. Chamber of Commerce’s Administrative Law & Government Litigation Advisory Committee.  From 2015 to 2021, she served on the Board of Directors for the Historical Society of the D.C. Circuit.  And from 2010 to 2015, she was a Public Member of the Council of the Administrative Conference of the United States, which is composed of leading authorities on administrative law.

Ms. Walker worked in the White House Counsel’s Office as Associate Counsel to President George W. Bush from 2001 to 2003.

Ms. Walker clerked for U.S. Supreme Court Justice Clarence Thomas from 1995 to 1996 and Judge J. Harvie Wilkinson III of the U.S. Court of Appeals for the Fourth Circuit from 1994 to 1995.

Ms. Walker is listed as a leading lawyer in Appellate Law and Telecom, Broadcast & Satellite, and Commercial Litigation by Chambers USA.  In 2011, The American Lawyer selected her as one of the “45 Under 45,” “best of the best among young women lawyers” in the United States.  The National Law Journal named her one of “Washington’s Most Influential Women Lawyers” in 2011, and Washingtonian magazine has recognized her as one of the D.C.’s “Top Lawyers” in its biennial rankings, including in its 2022 list of “Top Lawyers: Supreme Court.”  In 2014 and 2015, she was included in Washington Life magazine’s “The Power 100” list of “influential players running Washington and the world.”

In addition, she was:

Ms. Walker graduated in 1994 from the University of Virginia School of Law, where she was a member of the Order of the Coif and Raven Society and served as Executive Editor of the Virginia Law Review.  She also received the Robert E. Goldsten Award and John M. Olin Prize in Law and Economics.

Ms. Walker is admitted to practice in the District of Columbia.

University of Virginia - 1988 Bachelor of Arts