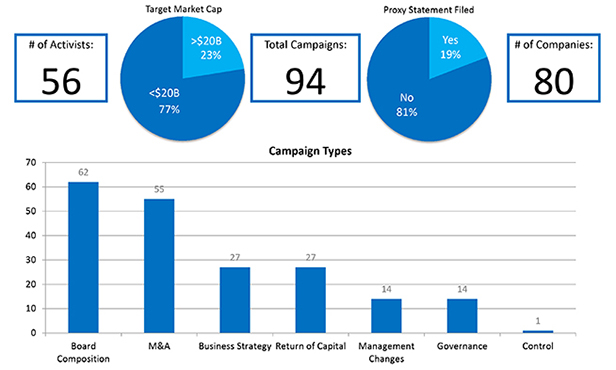 *Study covers selected activist campaigns involving domestically traded companies with equity market capitalizations of greater than $1 billion as of June 30, 2015 (for H1 2015 campaigns) or December 31, 2015 (for H2 2015 campaigns)(unless company is no longer listed).
**All data represented here is derived from the data compiled from the campaigns studied for Activism Update.

Additional statistical analyses may be found in the complete Activism Update attached below.

In this edition of Activism Update, our survey covers 44 public activist actions involving 38 different companies by 29 different activist investors during the period from July 1, 2015 to December 31, 2015.  Five of those companies faced advances from at least two activist investors, including two companies that faced coordinated actions by two investors.[3]  Market capitalizations of the targets ranged from just above our study’s $1 billion minimum to approximately $294 billion.

While change in board composition, including gaining representation on the board, predictably continued to be a common goal of activist investors (66%) in 2015, over half of the activist actions we reviewed in 2015 included goals related to M&A, including pushing for spin-offs and advocating both for and against sales or acquisitions (59%).  High market caps continue to not deter activists from making advances, as 23% of the companies included in our 2015 surveys had market capitalizations above $20 billion.  Though proxy solicitations in the second half of 2015, outside of proxy season, were less common than in the first half of the year (5% in H2 vs. 25% in H1), the second half of 2015 saw nearly as many publicly filed settlement agreements as 2015’s first six months (10 in H2 vs. 12 in H1).

Overall in 2015, proxy solicitations took place in only 19% of campaigns, and settlement agreements were publicly filed in 23% of campaigns.  Within such settlement agreements, non-disparagement clauses, standstill periods and voting agreements all remained nearly ubiquitous, but expense reimbursements have grown increasingly rare (10% in H2 2015 vs. 37.5% in 2014 and H1 2015).  We delve further into the data and the details in the attached copy of the Activism Update.

While proxy campaigns by activists and formal settlement agreements continue to be the exception rather than the rule, companies do appear to be taking proactive measures in anticipation of or in response to activists, including board or management changes, corporate governance reviews, stock buybacks and strategic initiatives.

In this edition of Gibson Dunn’s Activism Update, we have included a chart of the activist campaigns covered by our survey and statistical analyses of various trends for each of H2 2015 and all of 2015, as well as a survey of settlement agreement terms with breakdowns of settlement agreements publicly filed during the second half of 2015 and updated statistics on key settlement terms from 2014 through the end of 2015.

We hope you enjoy Gibson Dunn’s 2015 Year-End Activism Update.  If you have any questions, please do not hesitate to reach out to a member of your Gibson Dunn team.

[2]   Several companies faced actions from multiple activist investors, some of whom were acting in concert while others were acting independently vis-à-vis the target.

[3]   The other three companies were subject to multiple activists acting independently.