This Client Alert provides an update on shareholder activism activity involving domestically traded public companies with equity market capitalizations above $1 billion during the second half of 2016.  Notwithstanding a difficult market backdrop in 2016, including the surprise “Brexit” vote, a bitterly fought U.S. presidential campaign, a significant decline in oil prices, and vigorous public debate on “short-termism,” activist investors continued to be busy across a wide range of industries (even if fewer campaigns made major headlines).  Furthermore, in 2016 as compared to 2015, our survey found relative consistency in the total number of public activist actions (90 vs. 95), the number of activist investors involved in such actions (60 vs. 56), and the number of companies targeted by such actions (78 vs. 81).

In this edition of Activism Update, our survey covers 48 total public activist actions, involving 35 different activist investors and 43 companies targeted, during the period from July 1, 2016 to December 31, 2016.  Four of those companies faced advances from multiple investors, including one company that faced actions by three investors and another company that saw two activists temporarily coordinate their efforts.  Equity market capitalizations of the targets range from just above the $1 billion minimum covered by this survey to approximately $280 billion. 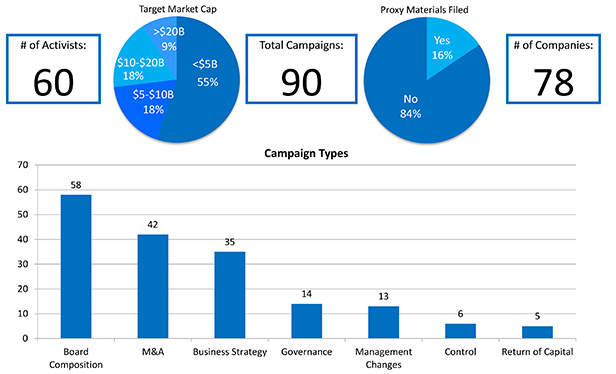 We hope you find Gibson Dunn’s 2016 Year-End Activism Update informative.  If you have any questions, please do not hesitate to reach out to a member of your Gibson Dunn team.