This Client Alert provides an update on shareholder activism activity involving NYSE- and NASDAQ-listed companies with equity market capitalizations above $1 billion during the first half of 2017.  Activism has continued at a vigorous pace thus far in 2017.  As compared to the same period in 2016, this mid-year edition of Gibson Dunn’s Activism Update captured more public activist actions (59 vs. 45), more activist investors taking actions (41 vs. 35), and more companies targeted by such actions (50 vs. 38).

During the period from January 1, 2017 to June 30, 2017, seven of the 50 companies targeted faced advances from multiple activists, including two companies that each had three activists make separate demands and two companies that each dealt with activists acting jointly.  As for the activists, 10 of the 41 captured by our survey took action at multiple companies.  Equity market capitalizations of the target companies ranged from just above the $1 billion minimum covered by this survey to approximately $235 billion, as of June 30, 2017. 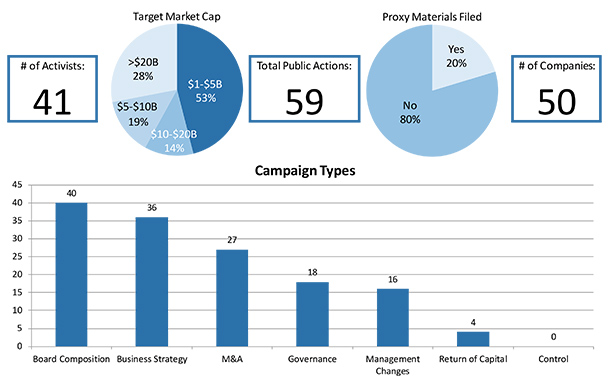 *Study covers selected activist campaigns involving NYSE and NASDAQ-traded companies with equity market
capitalizations of greater than $1 billion as of June 30, 2017 (unless company is no longer listed).
**All data is derived from the data compiled from the campaigns studied for the 2017 Mid-Year Activism Update.

Activists continued to be most interested in changes to board composition, including gaining representation on the board (67.8% of campaigns), and changes to business strategy (61.0% of campaigns).  Goals related to M&A, including pushing for spin-offs and advocating both for and against sales or acquisitions, came up in 45.8% of the campaigns covered by our survey, while other governance initiatives (30.5% of campaigns) and changes in management (27.1% of campaigns) were relatively less common.  Interestingly, multiple activists approached companies not only seeking a change in management but with hand-picked replacements identified as part of their campaigns (e.g., Mantle Ridge at CSX Corp.).  Finally, while 20.3% of campaigns involved proxy solicitations during this past proxy season, none of the situations we cover involved attempts to take control of companies.  Of the 12 proxy solicitations we reviewed, four reached a shareholder vote but only one resulted in a dissident victory, despite ISS and Glass Lewis supporting the dissident slate in two of the votes in which companies prevailed.  We also note that, while activism continues to be most frequent at small-cap companies (46.0% of companies targeted had equity market capitalizations below $5 billion), the first half of 2017 saw a resurgence in activism at companies with equity market capitalizations greater than $20 billion, with 14 such companies targeted (28.0% of companies targeted), which is double the total number of such companies targeted in all of 2016.  More data and brief summaries of each of the activist actions captured by our survey follow in the first half of this publication.

The number of publicly filed settlement agreements reviewed for this edition of our Activism Update declined against the same period in 2016 (12 vs. 17).  The decline in publicly filed agreements despite the rise in overall campaigns may be attributable to an increased willingness of companies to adopt activist requests, sometimes even appointing activist director nominees, without reaching a formal agreement.  Within the settlement agreements we reviewed, the inclusion of certain key terms has appeared to become standard since we first started tracking such terms in 2014.  Standstill periods, voting agreements, and ownership thresholds each appear in at least 90% of agreements.  Non-disparagement provisions appear in 87% of agreements, while the inclusion of other strategic initiatives (e.g., replacement of management, spin-offs, governance changes) and committee appointments for new directors are somewhat less frequent, each appearing in just over 70% of agreements.  Reimbursement of expenses continues to appear only occasionally (36%).  Notably, the frequencies of each of the tracked terms in the 12 agreements reviewed for this edition did not materially differ from the respective average frequencies since 2014.  We delve further into the data and the details in the latter half of this edition of Gibson Dunn’s Activism Update.

We hope you find Gibson Dunn’s 2017 Mid-Year Activism Update informative.  If you have any questions, please do not hesitate to reach out to a member of your Gibson Dunn team.