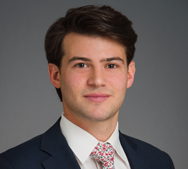 Trevor Gopnik is an associate in the New York office of Gibson, Dunn & Crutcher, where he currently practices in the firm’s Litigation Department.

From 2019 to 2020, Mr. Gopnik served as a law clerk to the Honorable Helen Gillmor of the United States District Court for the District of Hawaii.

Mr. Gopnik is admitted to practice in the State of New York and before the United States District Courts for the Southern and Eastern Districts of New York.

University of Virginia - 2013 Bachelor of Arts