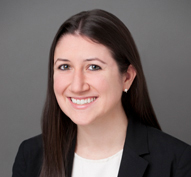 Jaclyn Neely is a litigation associate in the New York office of Gibson, Dunn & Crutcher.  She is a member of the Firm’s White Collar Defense and Investigations, Securities Enforcement, Anti-Money Laundering, and Litigation Practice Groups.

Ms. Neely has been recognized by The Best Lawyers in America® as “One to Watch” in the area of Criminal Defense: White-Collar.

Ms. Neely received her Juris Doctor in 2012 from Columbia Law School, where she was named a Harlan Fiske Stone Scholar and served as the Bluebook Editor of the Columbia Law Review.  She received her Bachelor of Arts in Political Science and Psychology from the University of North Carolina at Chapel Hill in 2009.

Ms. Neely is admitted to practice in the State of New York and the United States District Courts for the Southern and Eastern Districts of New York.