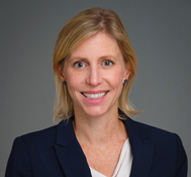 Laura O’Boyle is a litigation partner in the New York office of Gibson, Dunn & Crutcher.  She is a member of Gibson Dunn’s Securities Litigation, Media, Entertainment and Technology, and Crisis Management Practice Groups.

Ms. O’Boyle graduated with distinction in 2006 from Stanford Law School, where she served as vice-president of the Stanford Public Interest Law Foundation and a research assistant for the Stanford Law School Center for E-Commerce.  At Stanford, Ms. O’Boyle also was a member of the Stanford Journal of International Law and the Stanford Judicial Review. In 2002, she earned her Bachelor of Arts degree, magna cum laude, in Public Policy from Brown University, where she was elected to Phi Beta Kappa.  Ms. O’Boyle co-chairs the Parenting Group in the New York office, and has previously served on the firm’s Hiring, Diversity and Community Affairs Committees.  Ms. O’Boyle is admitted to practice in the State of New York.

Ms. O’Boyle also maintains a robust pro bono practice, and has successfully represented multiple individuals in asylum proceedings, as well as numerous clients through Volunteer Lawyers for the Arts.