I. Recognition of Foreign Judgments in the United States

At present, there is no federal law that governs the recognition of foreign judgments in the United States, nor is there an international treaty in force.  Rather, recognition and enforcement are a question of state law, although the rules are relatively consistent across all 50 U.S. states and the District of Columbia.[5]  Most U.S. states have modeled their approaches to foreign judgment recognition on the model laws promulgated by the National Conference of Commissioners on Uniform State Laws—the Uniform Foreign Money Judgments Recognition Act of 1962 (the “1962 Uniform Act”), or increasingly, the Uniform Foreign-Country Money Judgments Recognition Act of 2005 (the “2005 Uniform Act”).[6]

The 2019 Hague Judgments Convention is the culmination of over 25 years of negotiations at the Hague Conference on Private International Law (the “Hague Conference”).[8]  The process began in 1992 at the request of the United States, which sought to develop a global approach to jurisdiction and recognition of judgments.[9]  The final text of the Hague Judgments Convention was eventually signed and opened for signature on 2 July 2019.  Signatory States in addition to the United States include Uruguay, Ukraine, Israel, Costa Rica, and the Russian Federation (in order of signature).[10]  The European Commission is also contemplating accession on behalf of the EU Member States.[11] 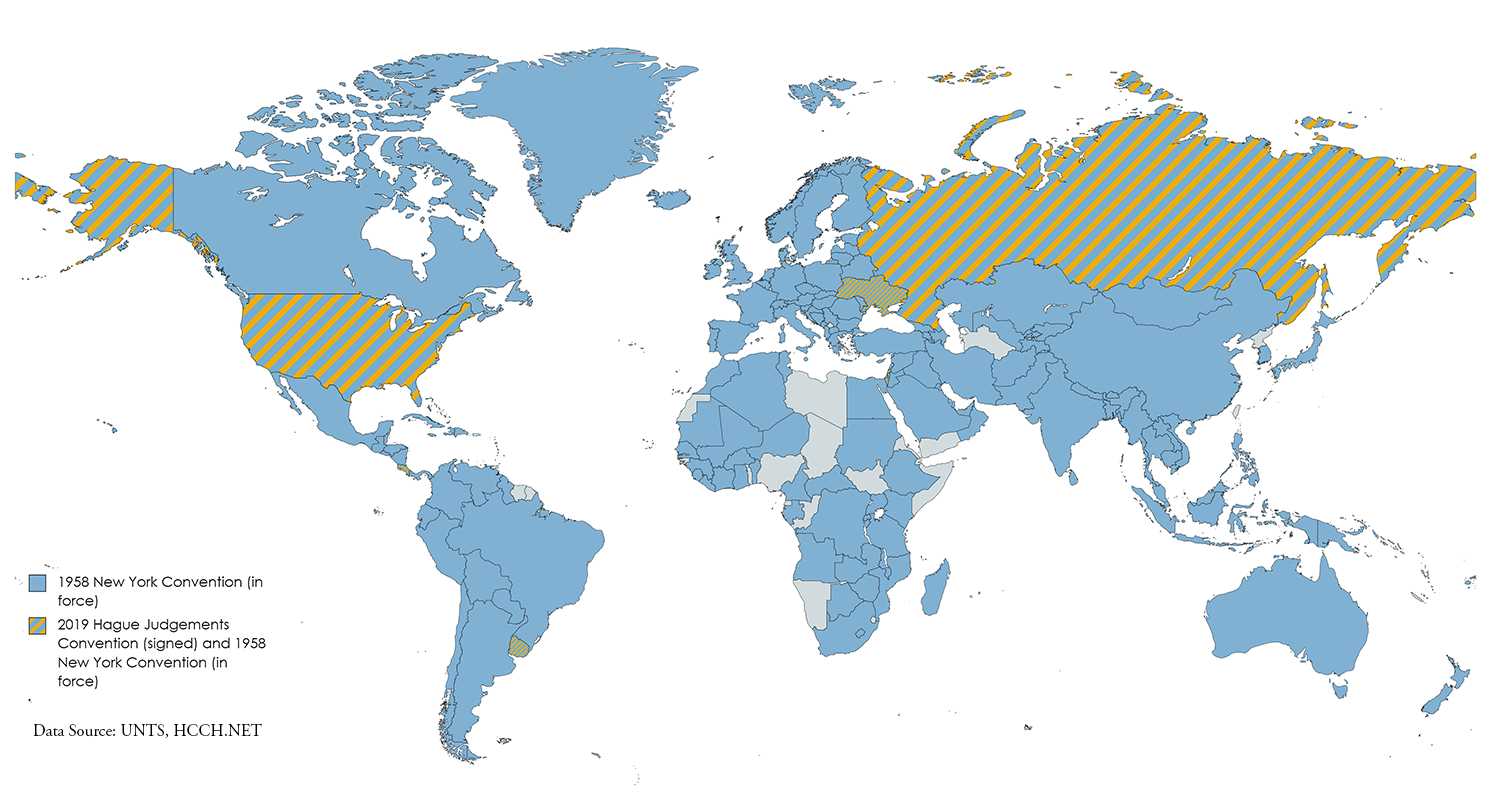 The Convention will enter into force as soon as the second State deposits its instrument of ratification, acceptance, approval, or accession.[12]  However, under Article 29 (the “bilateralization” clause), a Contracting State can prevent the application of the Convention to judgments rendered by the courts of a particular State by making a targeted declaration.[13]

The Convention applies to “the recognition and enforcement of judgments relating to civil or commercial matters.”[14]  It specifically excludes subjects that are fundamental to State sovereignty or public policy (such as criminal, revenue, customs, or administrative matters),[15] as well as other specialized areas, some of which are subject to other treaty regimes or where the rules vary more significantly across jurisdictions (such as matters involving family disputes, intellectual property, antitrust, defamation, privacy, or armed forces matters).[16]

The Convention, like most domestic laws, favors recognition.  It requires each Contracting State to recognize and enforce judgments from other Contracting States in accordance with its terms and permits refusal only on those grounds expressly set out in the Convention.[17]

Article 5(1) of the Convention sets out 13 “bases” of recognition and enforcement, including, inter alia, that:

These bases for jurisdiction and enforcement echo the basic concepts found in domestic U.S. recognition and enforcement law,[18] including the constitutional due process requirements reflected in the notion of “minimum contacts” that U.S. courts require for the exercise of long-arm jurisdiction and the comity-based rules adopted by the U.S. Supreme Court in the seminal decision, Hilton v. Guyot, 159 U.S. 113 (1895).

If any of the jurisdictional tests (or “jurisdictional filters”[19]) in Article 5(1) is met, then the judgment is presumptively “eligible” for recognition and enforcement.[20]  Under Article 15, national law provides a further independent basis for recognition.[21]  In this sense, “the convention is a floor, not a ceiling.”[22]

Article 7 of the Convention, in turn, sets out discretionary bases for non-recognition, including, inter alia, the following:

This too reflects the traditional non-recognition grounds found in most national legal systems, including that of the United States, such as inconsistency with the forum State’s public policy, due process violations, fraud, lack of notice or proper service, and conflict with other judgments.[24]

The Hague Judgments Convention is therefore in line with many precepts of existing U.S. recognition and enforcement law reflected in the 2005 Uniform Act.[25]  However, the Convention covers not only foreign money judgments, but civil and commercial decisions generally.

III. Implications for the Recognition of Foreign Judgments in the United States

The Convention could be “a gamechanger for cross-border dispute settlement”[26] by providing a set of consistent rules for the recognition and enforcement of foreign judgments, much like the New York Convention has been for the widespread adoption of arbitral awards.  Ultimately, a judgment in an international dispute is only as valuable as the judgment creditor’s ability to have it recognized and enforced abroad (where the judgment debtor or its assets may be found).  However, making the enforcement of foreign judgments easier can be a double-edged sword.  While a more robust and predictable enforcement regime can certainly be beneficial, that is only the case where the foreign court provides due process and a just outcome.

Ultimately, the force of the Hague Judgments Convention will depend on how widely it is signed and ratified.  Following the U.S. signature, the Hague Judgments Convention will not automatically come into force in the United States.  It must first undergo a ratification process in U.S. Congress, a procedure that can in some cases take several years.  Ratification may be slower here due to the prevalence of state law (and absence of federal law) in this particular area.[27]

For U.S. litigants, if ultimately ratified by the United States, the Hague Judgments Convention could aid the recognition and enforcement of U.S. judgments in a wider range of countries, in particular in jurisdictions that may currently refuse recognition on reciprocity grounds (i.e., where a foreign court would not recognize a U.S. judgment unless convinced that its judgment would receive the same treatment by a U.S. court).  Similarly, the Convention could facilitate the recognition and enforcement of foreign judgments issued by courts of other Contracting States in U.S. courts (of course subject to the above-mentioned non-recognition defenses).  This would greatly increase the ability of both U.S. and non-U.S. litigants to obtain meaningful cross-border relief in transnational litigation.

Until the Hague Judgments Convention comes into force, global trade and investment will continue to be facilitated by alternative dispute resolution mechanisms, such as the New York Convention for arbitral awards, as discussed above, and the new Singapore Convention for international settlement agreements resulting from mediation.[28]  Thus, for now, international arbitration awards remain more portable than foreign judgments (in addition to other advantages of international arbitration, like the selection of a neutral forum to avoid any “home court” advantage).[29]

[11]   European Commission, Proposal for a Council Decision on the Accession by the European Union to the Convention on the Recognition and Enforcement of Foreign Judgments in Civil or Commercial Matters, COM (2021) 388 (July 16, 2021), here (last visited Mar. 18, 2022) (recommending accession to the Convention so as to ensure the circulation of foreign judgments beyond the EU area and to increase “growth in international trade and foreign investment and the mobility of citizens around the world”).

[17]   See id. at art. 4(1) (“A judgment given by a court of a Contracting State (State of origin) shall be recognised and enforced in another Contracting State (requested State) in accordance with the provisions of this Chapter. Recognition or enforcement may be refused only on the grounds specified in this Convention.”).

[20]   On the other hand, a judgment that ruled on rights in rem in immovable property “shall be recognised and enforced if and only if the property is situated in the State of origin.”  Convention, art. 6.

[21]   Convention, art. 15 (“Subject to Article 6, this Convention does not prevent the recognition or enforcement of judgments under national law.”)

[26]   Hague Conference on Private International Law, Gamechanger for Cross-Border Litigation in Civil and Commercial Matters to be Finalized in the Hague (June 18, 2019) (quoting the Secretary General of the Hague Conference), https://www.hcch.net/en/news-archive/details/?varevent=683 (last visited Mar. 18, 2022).

[29]   For international commercial arbitration awards, the above map shows the broad reach of the New York Convention.

Gibson Dunn’s lawyers are available to assist in addressing any questions you may have regarding these issues. Please contact the Gibson Dunn lawyer with whom you usually work, any member of the firm’s International Arbitration, Judgment and Arbitral Award Enforcement or Transnational Litigation practice groups, or the following: