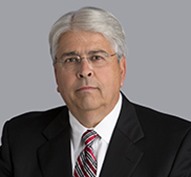 Joseph D. West is a partner in the Washington, D.C. office of Gibson, Dunn & Crutcher and former Co-Chair of the firm’s Government Contracts Practice.  For over 40 years, Mr. West has concentrated his practice on contract counseling, compliance/enforcement, and dispute resolution.  He has represented both contractors (and their subcontractors, vendors and suppliers) and government agencies, and has been involved in cases before various United States Courts of Appeals and District Courts, the United States Court of Federal Claims, numerous Federal Government Boards of Contract Appeals, and both the United States Government Accountability Office and Small Business Administration.

Mr. West’s practice spans multiple industries including aerospace and defense, information technology, professional services, banking and financial institutions, pharmaceuticals and medical devices, telecommunications, and construction and architecture/engineering. He enjoys an exceptional reputation for his expertise in government contracting.  Mr. West was awarded a Peer Review Rating of “AV Preeminent” by Martindale-Hubbell for 30 consecutive years (1991-2020) and is regularly recognized as one of the top 25 government contracts lawyers nationwide by Chambers USA – America’s Leading Business Lawyers (2005-2021). Washington DC Super Lawyers ranked Mr. West in the Government Contracts practice area for 14 consecutive years (2007 – 2020), and has named him as one of the “Top 100” Washington, DC lawyers across all practice areas multiple times. Chambers USA has also recognized Mr. West as one of the leading construction lawyers in the nation. He has received repeated recognition from The Legal Times, Washington Business Journal, and The Washingtonian Magazine.

Mr. West has particular expertise in compliance and enforcement matters, and has led numerous internal investigations. He has handled dozens of “mandatory disclosure” matters before numerous agency Inspectors General and published the initial Briefing Paper on the subject. Additionally, he has defended Civil False Claims Act charges brought by qui tam relators and the Department of Justice.  Mr. West has developed compliance programs for corporate clients and conducted corresponding training.

Mr. West’s practice also focuses on suspension and debarment. He has successfully represented clients in various industries (e.g., defense, telecommunications, construction, and pharmaceutical manufacturing) in formal suspension and/or debarment proceedings and in their continuing relationships with agency debarment officials.

On national security issues, Mr. West has worked closely with companies in satisfying the requirements of the National Industrial Security Program overseen by the Defense Counterintelligence and Security Agency (formerly the Defense Security Service) in conjunction with  foreign investments or acquisitions.  He has also advised numerous companies as to dealing with foreign investment in U.S. companies, including filings with the Committee on Foreign Investment in the United States (CFIUS), and he has expertise and published a number of pieces regarding matters involving the Export Administration Regulations (EAR) and International Traffic in Arms Regulations (ITAR)Mr. West also has in-depth experience with all types of ADR and he regularly works on claims analysis, development, negotiation and resolution by litigation, if necessary.

Mr. West has litigated (for both plaintiffs and defendants) numerous award challenges in Federal Courts and before the Government Accountability Office. Mr. West is also the author of several articles and he has lectured extensively on the government’s use of Past Performance Information as the most significant non-price evaluation factor in the source selection process. In addition to handling disputes, Mr. West has vast knowledge of terminations, having spent over three years working on the largest default termination in government contracts history. He has also successfully negotiated and litigated numerous default and convenience termination disputes.

Within the area of construction and engineering, Mr. West has provided contract expertise on project finance disputes in numerous countries and worked with international arbitration partners on major construction disputes under ICSID and UNCITRAL rules. Additionally, he has handled a variety of prime-sub issues including work with clients to negotiate all types of subcontract, vendor and supplier agreements and litigated disputes arising out of subcontracts and teaming agreements.

Mr. West is a registered Professional Engineer in the Commonwealth of Virginia and served four years as an officer in the United States Navy Civil Engineer Corps. He has held (and is presently qualified to hold) top secret and special access security clearances and is a member of the bars of the Commonwealth of Virginia and the District of Columbia.