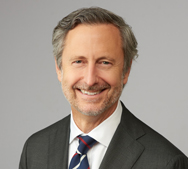 Michael Bopp is a partner in the Washington, D.C. office of Gibson, Dunn & Crutcher.  He brings his extensive government and private-sector experience to help clients navigate through the most difficult crises, often involving investigations as well as public policy and media challenges.  He chairs the Congressional Investigations Subgroup and he is a member of the White Collar Defense and Investigations Crisis Management Practice Groups. He also co-chairs the firm’s Public Policy Practice Group and is a member of its Financial Institutions Practice Group.

Mr. Bopp’s practice focuses on congressional investigations, internal corporate investigations, and other government investigations.  He also advises clients on public policy and regulatory consulting in a variety of fields, and managing and responding to major crises involving multiple government agencies and branches. Mr. Bopp is one of only two attorneys in the country listed in Band 1 for Congressional Investigations by Chambers.  BTI Consulting named Mr. Bopp to its 2018 BTI Client Service All-Stars list, recognizing the “lawyers who truly stand out as delivering the absolute best client service” as determined by a poll of corporate counsel.

A particular specialty is preparing people to testify at congressional hearings and for other high-profile, public, often contentious events.  Mr. Bopp served as the debate coach for Senator Susan Collins in the 2020 election cycle.  About the race, Politico noted that Senator Collins “staged one of the most remarkable Senate comebacks of the past decade.”

Mr. Bopp has extensive experience representing clients in congressional, executive branch, and internal investigations. During more than a decade on Capitol Hill, Mr. Bopp led or played a key role in major investigations in both the Senate and House of Representatives, including four special investigations.  In these capacities, he developed the strategy and set the agenda, and managed the discovery efforts for numerous investigations and orchestrated more than 100 committee hearings.

Mr. Bopp has extensive knowledge of both legislative and regulatory processes, as well as of the powers and authorities of Congressional committees, and he has testified as an expert on Congressional investigations before Congress.  He currently chairs the ABA’s Committee on Legislative Process and Congressional Investigations.  His contacts are extensive and strong in both Republican and Democratic circles.

Since joining Gibson, Dunn in 2008, Mr. Bopp has defended clients in dozens of Congressional and other investigations and has prepared numerous CEOs and other top executives for committee hearings, depositions, and interviews.  He also brings his more than two decades of investigations experience to bear on internal investigations on important matters for a variety of clients.

Mr. Bopp’s engagements include representing companies, associations, other entities and individuals in the following investigations:

Mr. Bopp has handled a variety of financial regulatory reform issues.  He has helped numerous clients work with Congress and the Administration on regulatory reform legislation, and shape, prepare for, and sometimes challenge new regulatory requirements promulgated as a result of the Dodd-Frank Act.

Among his many successes is helping to create and run the Coalition for Derivatives End-Users, which has roughly 300 active company and trade association members.  The Coalition works on both legislative and regulatory fronts to help protect interests of end-user companies in the debate over appropriate regulation of derivatives and has been a highly-successful participant in these processes.   The Coalition’s top two priorities – establishing a  statutory margin exemption for end-users and a clearing exemption for end-users that hedge through centralized treasury units –are two of the only substantive amendments to the Dodd-Frank Act that have become law.

As a result of this work, Mr. Bopp has been named one of the 100 most influential people in finance by Treasury and Risk magazine and has been asked to testify before Congress.

From 2006-2008, Mr. Bopp served as Associate Director of OMB and was responsible for overseeing budgets and coordinating regulatory, legislative, and other policy for approximately $150 billion worth of spending for various government agencies, including the Departments of Treasury, Homeland Security, Transportation, Justice, Housing and Urban Development, and Commerce, the General Services Administration, the U.S. Securities and Exchange Commission and the Commodity Futures Trading Commission.

From 2003 to 2006, he served as Staff Director and Chief Counsel of the Committee on Homeland Security and Governmental Affairs, one of the Senate’s largest committees and most expansive in terms of jurisdiction. He oversaw more than 100 hearings, led numerous investigations and was a primary drafter of key legislation, including the Intelligence Reform and Terrorism Prevention Act of 2004, the most significant reform of the intelligence community in more than 50 years, and 2006 legislation strengthening port security and overhauling the Federal Emergency Management Agency. He also directed a 50-person investigation of the failure of preparations and response to Hurricane Katrina. The investigation included 22 hearings, 325 witnesses, more than 800,000 pages of documents and an 800 page report.

Mr. Bopp served as Legislative Director and General Counsel to Senator Susan Collins of Maine from 1999 to 2003.  He was Chief Counsel to the Subcommittee on Oversight and Investigations of the Committee on Education and the Workforce in the U.S. House of Representatives from 1998 to 1999, where he investigated alleged improper activities undertaken by Teamsters’ officials.  Before that, he worked on the Congressional investigation of campaign finance abuses as senior investigative counsel to the House Committee on Government Reform and Oversight and as counsel for the Senate Committee on Governmental Affairs. He also previously served as counsel on the Senate Permanent Subcommittee on Investigations.  Mr. Bopp served as outside general counsel to the campaign to re-elect Senator Susan Collins.