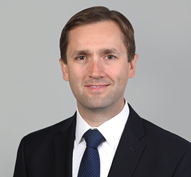 Blaine H. Evanson’s practice focuses on complex commercial litigation both in the trial court and on appeal. He is a member of the firm’s Appellate and Constitutional Law, Class Actions, Labor and Employment, and Intellectual Property practice groups.

Mr. Evanson has represented clients in a wide variety of appellate matters in the Supreme Court of the United States and federal and state appellate courts around the country. He has briefed several dozen appeals across almost every federal court of appeals and many state appellate courts, and has argued several appeals in the Ninth Circuit and California’s Courts of Appeal. In the trial court, Mr. Evanson has broad commercial litigation experience, particularly with complex motion practice before, during, and after trial.

Law360 named Mr. Evanson one of five national appellate “Rising Stars” under 40 in 2018, and Euromoney named him the 2018 “Best in Litigation: Appellate” under 40. He has been included in the appellate practice section of The Best Lawyers in America since 2013; Benchmark Litigation for several years included him on its “40 & Under Hot List”; and Super Lawyers has named him a Southern California Super Lawyer. Mr. Evanson is also a member of the California Academy of Appellate Lawyers.

Before joining the firm, Mr. Evanson served as a law clerk for Judge A. Raymond Randolph of the United States Court of Appeals for the D.C. Circuit. He graduated from Columbia Law School, where he was a James Kent Scholar and a Senior Editor on the Columbia Law Review. He received his Bachelor of Science degree in Information Systems from Brigham Young University.

Mr. Evanson is a member of the California bar, and is admitted to practice before the Supreme Court of the United States; the United States Courts of Appeals for the First, Second, Third, Fourth, Fifth, Seventh, Eighth, Ninth, Tenth, Federal, and D.C. Circuits; and the United States District Courts for the Northern, Central, and Eastern Districts of California.