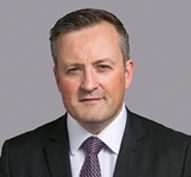 Mr. Doris’ recent commercial disputes experience has extended to advising corporations, UK public bodies and sovereign states in claims in courts and tribunals in the UK and around Europe. He has particular expertise in antitrust cases, human rights disputes and collective actions.

Mr. Doris is recognised by Legal 500 UK 2023 in the field of Regulatory Investigations and Corporate Crime. He is also ranked as a leading individual in the field of Administrative and Public Law, he is described as “highly attuned to client objectives, … [with] very good communication skills and clients love him.” In previous editions, clients have noted his: “…exceptional contribution to … work to decriminalise homosexuality worldwide”. Clients describe him as “totally committed, a great manager and really goes the extra mile” and “outstanding, has tremendous judgment, works exceptionally hard and always gives the impression that he is 100% dedicated to and focused on your case”.

Mr. Doris earned his LL. M. (first class) in European Law in 1996; and received his BA in Law in 1994 from Trinity Hall, Cambridge University. Before entering private practice, Mr. Doris taught law at the University of Warwick and worked in the Criminal Division of the Law Commission of England & Wales, the UK government’s primary law reform body. Mr. Doris speaks English, Spanish, French and Catalan, with recent experience of conducting investigations in each of those languages.

University of Cambridge - 1994 Bachelor of Arts