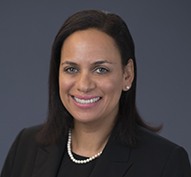 In 2022, Ms. Denerstein was appointed to serve as the independent NYPD Monitor to oversee the court ordered reform process.  Previously, Ms. Denerstein has served  in wide variety of roles as in government, including as Counsel to the New York State Governor, as an Executive Deputy Attorney General in the New York Attorney General’s Office, and as Deputy Commissioner for Legal Affairs for the New York City Fire Department.  In addition, Ms. Denerstein served as a federal prosecutor in the U.S. Attorney’s Office for the Southern District of New York, prosecuting complex securities, money laundering and organized crime cases, and then as Deputy Chief of the Criminal Division.

Ms. Denerstein has received numerous awards for her contributions, including the 2020 “Diversity & Inclusion Champion Award” from the New York City Bar Association for advancing equity and inclusion for attorneys in New York,  the 2016 “Distinguished Public Service Award” from A Better Balance for her work on the Women’s Equality Act,  the Association of Black Women Attorneys’ 2015 “Professional Achievement Honor” and the 2015 Citizens Union of the City of New York’s “Public Service Award.”

Ms. Denerstein graduated in 1993 from Columbia Law School, where she was named a Charles Evans Hughes Fellow for outstanding commitment to public service and was a recipient of the Jane Marks Murphy Prize for exceptional proficiency and advocacy in clinics.

University of Virginia - 1989 Bachelor of Arts