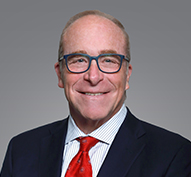 Scott A. Edelman is a partner in Gibson, Dunn & Crutcher’s Century City office.  He is Co-Chair of its Media, Entertainment and Technology Practice Group, and a member of the firm’s Executive Committee, Litigation Department, and multiple practice groups.  He previously served as the firm’s National Pro Bono Chair.

Mr. Edelman has first-chaired numerous jury trials, bench trials and arbitrations, including class actions, taking well over twenty-five to final verdict or decision.  He has a broad background in commercial litigation, including antitrust, class actions, employment, entertainment and intellectual property, real estate and product liability.  Mr. Edelman is a Fellow of the American College of Trial Lawyers.  Fellowship is extended by invitation only to the best of the trial bar of the United States and Canada and cannot exceed one percent of the total lawyer population of any state or province.  He is also a Fellow of the invitation-only International Academy of Trial Lawyers (IATL), which limits membership to 500 fellows in the United States.

Mr. Edelman has substantial experience trying high-stakes cases.  Most recently, in the Spring of 2020, after a two-week trial that was closely watched by the industry, he achieved a total victory for AMC in a profit participation case over the Walking Dead television franchise, knocking out hundreds of millions of dollars in alleged liability.  In late 2018, he obtained a complete defense jury verdict for Ottogi Corporation in a five-week federal trial of an antitrust class action, a victory which earned him national recognition as AmLaw’s “Litigator of the Week.”  In 2016, he was lead counsel for Wal-Mart in a multi-week trial of a federal class action brought by 850 Wal-Mart truck drivers.  Mr. Edelman has also tried multiple significant fraud cases.  In 2018, he successfully defended a private equity client against fraud charges in a two-week trial in Delaware Chancery Court relating to the sale of a portfolio company.  He represented the plaintiff in obtaining a $122 million federal jury verdict in Intertainment v. Franchise Pictures and achieved the dismissal of two toxic torts cases against Dole Foods because of fraud on the court by plaintiffs and their counsel.  The Dole victory was featured as the cover story of the October issues of California Lawyer and Corporate Counsel, and received widespread newspaper coverage, including a front-page feature story in the Wall Street Journal.  Mr. Edelman and his practice group’s work for Dole and Chevron also were prominently mentioned in “Litigation Department of the Year,” The American Lawyer (January 2010/2012), and “The Kill Step,” The American Lawyer/Corporate Counsel (October 2009).  Mr. Edelman served as coordinating counsel for World Fuel Services, Inc. in relation to the various litigations arising from the derailment of a train in Lac-Mégantic, Montreal in July 2014.  In 2015, Mr. Edelman represented the University of California in a multi-week bench trial against an international consulting firm in asserting actuarial malpractice and violations of the False Claims Act.

Mr. Edelman has received numerous accolades. Most recently, in April 2022, Benchmark Litigation named him the West Coast Entertainment Litigator of the Year.  The publication noted, “Scott Edelman is near-constant mention of his peers for his varied, multi-faceted commercial disputes practice that includes a niche emphasis on entertainment.”  Additionally, in March 2022, The Hollywood Reporter named him a  Legal Legend, a “special feature dedicated to honoring entertainment industry attorneys whose career achievements are extraordinary.” In April 2020, he was named a Litigator of the Week by AmLaw Litigation Daily for the second time. Law360, which features lawyers who have “distinguished themselves from their peers by securing hard-earned successes in high-stakes litigation, complex global matters and record-breaking deals,” named Mr. Edelman among its 2020 MVPs.  Mr. Edelman was also chosen by Law360 as one of the 2019 Trial MVP’s for a series of trial victories that year.  He also was recognized by the Los Angeles Business Journal on the Top Litigators & Trial Lawyers in Los Angeles 2020 list.  The list highlights “the very best litigators in the business” who “go to the proverbial mat to fight for their clients.”  In 2019, he was among the 32 lawyers named to The National Law Journal’s “Winning Litigators” list, which recognizes “star trial litigators” who “took on high-stakes matters and won.”  The Daily Journal has ranked him as one of the Top 100 Lawyers in California.  He has received a Clay Award as “Lawyer of the Year” from California Lawyer and was recognized as an “Attorney of the Year” by The Recorder.  He was also named the “Litigator of the Year” by the Century City Bar Association, and was one of 10 litigators named in the Los Angeles Business Journal’s Top 100 Lawyers in Los Angeles, “Best of the Bar” and one of the “Best Lawyers in America” by American Lawyer Media.  Mr. Edelman also received the Learned Hand Award in June 2015 from the American Jewish Committee.  The award is presented to outstanding leaders in the legal profession and is the highest honor the AJC bestows on members of the legal profession.

Mr. Edelman represents multiple studios, television networks, music companies, production companies and other media-related entities.  Recognized as go-to counsel for his deep litigation experience, he is consistently recognized by legal and industry publications for his work.  He has been named repeatedly by Chambers USA as a Leading Media and Entertainment Litigation Lawyer in California; by the Hollywood Reporter as one of the top 100 “Power Lawyers”; by Daily Variety as one of Hollywood’s top litigators; and by The Best Lawyers in America® in the category of Entertainment Law: Motion Pictures & Television.  He has been named a California “Litigation Star” in Media and Entertainment Litigation in multiple editions of Benchmark Litigation, most recently in 2019.  The Daily Journal repeatedly has rated him as a top entertainment lawyer.  Recently, Billboard named Mr. Edelman to its list of the Music Industry’s Top Lawyers, featuring “41 of the top legal minds in the music business.”  Mr. Edelman was recently recognized by Legal 500 as a leading lawyer in media and entertainment and in Who’s Who Legal’s Sports guide for 2019.  He was selected as a Top 10 Southern California Super Lawyer by SuperLawyers, and has been ranked in numerous other legal industry publications.

Mr. Edelman received his law degree from the University of California (Boalt Hall) in 1984, where he was Co-Editor-in-Chief of the Ecology Law Quarterly.  He obtained his Bachelor of Arts degree in English from Stanford University in 1981, where he graduated with distinction.  Prior to joining Gibson, Dunn & Crutcher LLP, Mr. Edelman clerked for United States District Court Judge Jesse W. Curtis in the Central District of California.

A list of Mr. Edelman’s cases is available on request.