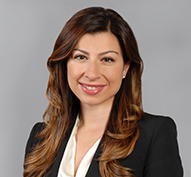 Theane Evangelis is a partner in the Los Angeles office of Gibson, Dunn & Crutcher LLP.  She serves as Co-Chair of the firm’s global Litigation Practice Group and previously served as Co-Chair of the firm’s Class Action Practice Group.  Ms. Evangelis is also a member of the Appellate, Labor and Employment, Media, Entertainment, and Technology, and Crisis Management Practice Groups.  She joined Gibson Dunn after serving as a law clerk to Justice Sandra Day O’Connor during October Term 2004 and as an associate with Ziffren Brittenham, a Los Angeles law firm specializing in entertainment and media transactions.  Before clerking for Justice O’Connor, Ms. Evangelis was a law clerk on the U.S. Court of Appeals for the Ninth Circuit.

Ms. Evangelis has served as lead counsel in a wide range of bet-the-company appellate, constitutional, class action, labor and employment, media and entertainment, and crisis management matters in trial and appellate courts across the country.  Her professional achievements are widely recognized by leading publications.  She is recognized by Chambers USA, a publication that identifies and ranks the most outstanding lawyers, for Appellate – Litigation in their 2021 and 2022 guides.  Additionally, Benchmark Litigation named her California Labor & Employment Litigation “Attorney of the Year” for her lead role in a variety of important class actions.  According to the Los Angeles Business Journal, which named Theane on its 2022 list of “Leaders of Influence” for Labor & Employment as well as a 2021 Labor and Employment “Lawyer of the Year;” she “has emerged as a go-to class action lawyer for businesses whose business models are under attack.”  In 2021 and 2022, the Daily Journal named Ms. Evangelis to its annual list of “Top 100 Lawyers” in California and credited her with “keeping the wheels of the gig economy turning” and Benchmark Litigation named her to its “Top 250 Women” list where selection is based on “individual litigators’ professional activities as well as client feedback surveys”.  Ms. Evangelis was also recognized by Best Lawyers as the 2023 Appellate Lawyer of the Year.

Ms. Evangelis has also been named a “Class Action MVP” by Law360 three times and has been named “Litigator of the Week” by The American Lawyer.  She received the 2022 distinguished Amicus Service Award from the International Municipal Lawyers Association for her service to the IMLA Legal Advocacy program.  In 2018 and 2019, she was named as one of Los Angeles’ Most Influential Women Attorneys by the Los Angeles Business Journal, an honor designated for only 75 of the city’s most influential women attorneys.  The Daily Journal has named her as a “Top Women Lawyer in California” for 2016-2022.  Most recently, Ms. Evangelis was named by Euromoney Legal Media Group as the 2021 Litigation Lawyer of Year at the Americas Women in Business Law Awards.

Ms. Evangelis is a member of the California bar and is admitted to practice in the Supreme Court of the United States, U.S. Courts of Appeal across the country, and all federal courts in California.  Ms. Evangelis serves on the board of the California Women’s Law Center and as a Trustee of the Global Greek Film Initiative.  She serves on the State Appellate Judicial Evaluation Committee of the Los Angeles Bar Association and is also a Member of the Board of Trustees of the NYU Law School as well as St. James Episcopal School.  Ms. Evangelis was also appointed recently by the Los Angeles County Board of Supervisors to the Los Angeles County Blue Ribbon Commission on Homelessness.

In its annual Top Verdicts of California 2018 feature, the Daily Journal recognized Ms. Evangelis  for three of her litigation successes where she was able to obtain record verdicts for clients Uber, Kimberly-Clark and Grubhub.  In 2018, she was selected by The American Lawyer as a Litigator of the Week based on her win on behalf of Grubhub in the first federal case regarding the classification of workers in the “gig” economy.  In 2013, she was named by the Daily Journal as one of the “Top 20 California Attorneys Under 40.”  She has been listed in Law360’s “Rising Stars” for 2013 and 2015 in Appellate Law, and a Class Actions “Rising Star” for 2014.  She was selected by her peers for inclusion in The Best Lawyers in America© in the field of Appellate Practice from 2014-2023 and was also named “Los Angeles Appellate Lawyer of the Year” by Best Lawyers®.  In addition, Ms. Evangelis has been recognized by The Recorder as one of California’s “Lawyers on the Fast Track,” and was selected as one of “Greek America’s Forty under 40” by the Greek America Foundation.  Southern California Super Lawyers named her as a “Super Lawyer” in Los Angeles Magazine in the category of Appellate Law, and she was recognized as one of the “25 Most Intriguing Greek Americans of 2010” by Greek America Magazine for her work challenging Proposition 8.  Benchmark Litigation has listed Ms. Evangelis on their “Under 40 Hot List,” which honors the achievements of the nation’s most accomplished legal partners of the age of forty or younger.  Benchmark Litigation also recognized her as a California “Future Litigation Star” in their 2018 and 2019 editions.