In Salzberg, et al. v. Sciabacucchi (“Blue Apron II”),[1] a unanimous Delaware Supreme Court, with Justice Valihura writing, confirmed the facial validity of federal-forum provisions (“FFPs”)—provisions Delaware corporations adopt in their certificates of incorporation requiring actions arising under the Securities Act of 1933 (the “1933 Act”) to be filed exclusively in federal court. The Court’s decision emphasizes the “broadly enabling” scope of both the Delaware General Corporation Law (“DGCL”) as a whole, and of Section 102(b)(1),[2] which governs the contents of a corporation’s certificate of incorporation, in particular. Rejecting facial challenges to FFPs adopted by Delaware corporations in connection with several recent IPOs, the Court held that Section 102(b)(1) authorizes corporations to adopt provisions regulating matters within an “outer band” of “intra-corporate affairs” extending beyond the “universe of internal affairs” of a Delaware corporation. In this regard, Blue Apron II may offer Delaware corporations, their boards and advisors a valuable new tool for managing complex, multidistrict litigation related to their corporate governance.

Blue Apron I and the Established Scope of “Internal Corporate Claims”

Blue Apron II reversed, on de novo review, the December 2018 decision of the Delaware Court of Chancery in Sciabacucchi v. Salzberg, et al. (“Blue Apron I”).[3] In Blue Apron I, a stockholder in each of Blue Apron, Inc., Roku Inc., and Stitch Fix, Inc. sought a declaratory judgment that FFPs adopted in each corporation’s certificate of incorporation in connection with their 2017 IPOs were facially invalid as a matter of Delaware law.

As detailed by Vice Chancellor Laster, the basic principles underlying the holding in Blue Apron I were developed in Boilermakers,[4] ATP Tour,[5] and DGCL § 115,[6] each of which addressed bylaws for disputes involving Delaware corporations. Relying upon these authorities, the Blue Apron I court held that, despite the broad scope of DGCL § 102(b)(1), the FFPs could not validly restrict a stockholder plaintiff’s choice of forum for actions arising under the 1933 Act because such claims were “external” to the corporations at issue based upon their similarity to “a tort or contract claim brought by a third-party plaintiff who was not a stockholder at the time the claim arose.” The Court of Chancery also concluded that Section 115 implicitly narrowed Section 102(b)(1) to restrict the authority of Delaware corporations to regulating only “internal corporate claims.” Additionally, the trial court also noted, but did not reach, an argument that FFPs are invalid as a matter of public policy, because they “take Delaware out of its traditional lane of corporate governance and into the federal lane of securities regulation” and could even be preempted by federal law providing forum alternatives.

The New Frontier: Intra-Corporate Affairs and the “Outer Band” of Section 102(b)(1)

In Blue Apron II, the Delaware Supreme Court reversed the Court of Chancery, holding that FFPs are facially valid because such provisions “could easily fall within either of the[] broad categories [of Section 102(b)(1)],” and “do not violate the laws or policies of this State” or “federal law or policy.” In doing so, the Supreme Court rejected the Court of Chancery’s conclusions that Section 115 implicitly narrowed Section 102(b)(1) and that, under Boilermakers and ATP Tour, “everything other than an ‘internal affairs’ claim was ‘external’ and, therefore, not the proper subject of a bylaw.”

Instead of such a “binary world,” the Supreme Court held that claims involving “intra-corporate affairs” under Section 102(b)(1), such as the federal antitrust claims underlying the fee-shifting bylaws in ATP Tour and certain 1933 Act claims considered hypothetically by the Court in Blue Apron II, sit on a “continuum” of corporate affairs. At one end of the spectrum is “the more traditional realm of ‘internal affairs,’” including “matters peculiar to the relationships among or between the corporation and its current officers, directors, and shareholders.” At the other end are “purely ‘external’ claims,” such as tort claims and commercial contract claims.  According to the Supreme Court, the scope of matters that certificates of incorporation may properly regulate under Section 102(b)(1) falls between those poles, as it set forth in Figure 1, below. The “outer band” of Section 102(b)(1), the Court explained, extends to all “[i]ntra-corporate affairs,” which is a “universe of matters” that “is greater than the universe of internal affairs matters.” This includes FFPs “regulating the fora for Section 11 claims involving at least existing stockholders [because such claims] are neither ‘external’ nor ‘internal affairs’ claims.” 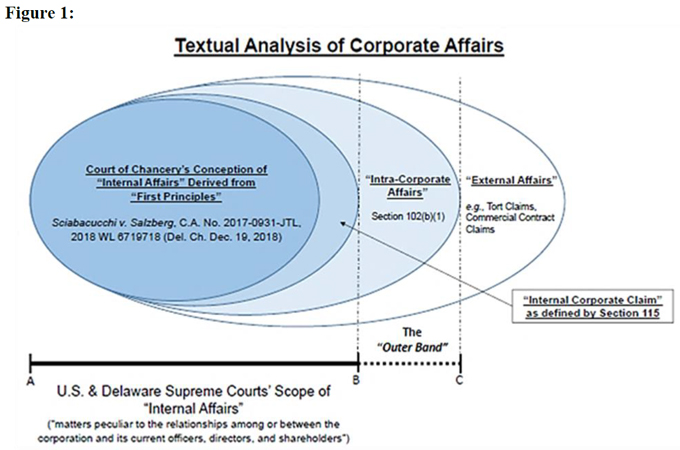 Notwithstanding the Supreme Court’s holding that federal-forum provisions are facially valid, the Court acknowledged that the extent to which such provisions will be respected and enforced going forward by Delaware courts, and, even more critically, by other state and federal courts, will depend in large part on the unique facts and circumstances of each case.

Blue Apron II provides valuable guidance to Delaware litigators and board advisors on best practices for adopting FFPs and other provisions governing the procedural aspects of intra-corporate litigation pursuant to Section 102(b)(1) of the DGCL:

[6]   8 Del. C. § 115 (“‘Internal corporate claims’ means claims, including claims in the right of the corporation, (i) that are based upon a violation of a duty by a current or former director or officer or stockholder in such capacity, or (ii) as to which this title confers jurisdiction upon the Court of Chancery.”).

Gibson Dunn lawyers are available to assist in addressing any questions you may have regarding these developments.  Please contact the Gibson Dunn lawyer with whom you usually work, any of the following practice group leaders and members, or the authors: