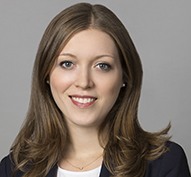 Laura Mumm is a litigation associate in the New York office of Gibson, Dunn & Crutcher.  She is a member of the Firm’s Media, Entertainment, and Technology, Intellectual Property, Class Actions, Privacy, Cybersecurity and Data Innovation, and Fashion, Retail and Consumer Products practice groups.  Ms. Mumm has litigated a broad range of complex civil and commercial disputes in both state and federal court, especially on behalf of clients in the technology and consumer products industries, with experience counseling and representing companies in all stages of litigation.  Her practice also includes founders’ disputes, consumer class actions, government investigations, securities cases, and internal investigations, as well as trade secrets, copyright, and trademark disputes.  Ms. Mumm has been recognized by The Best Lawyers in America®  as “One to Watch.”

Ms. Mumm also has an active pro bono practice, including representing clients seeking parole before the United States Parole Commission, representing an individual asylum seeker in Immigration Court and before the Board of Immigration Appeals and Fifth Circuit Court of Appeals, and assisting clients with green card applications under the Violence Against Women Act.  Ms. Mumm’s pro bono practice has also included representing immigration advocates in challenging a rule that would have hiked administrative fees in immigration proceedings to prohibitive levels in Catholic Legal Immigration Network et al. v. Executive Office for Immigration Review et al. and assisting with drafting an amicus brief for the United States Supreme Court in Johnson v. United States.

In 2017, Ms. Mumm served as a law clerk to the Honorable William F. Kuntz, II in the United States District Court for the Eastern District of New York.  Prior to her clerkship, Ms. Mumm practiced in the Washington, D.C. office of Gibson, Dunn & Crutcher.