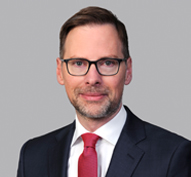 Ralf van Ermingen-Marbach is an of counsel in the Munich office of Gibson, Dunn & Crutcher. He is a member of the firm’s White Collar Defense and Investigations Practice.

Mr. van Ermingen-Marbach focuses his practice on internal investigations and the representation of corporations and individuals facing charges of criminal conduct. He has a decade-long experience as a prosecutor and has profound expertise in representing companies from the technology, banking, energy and health care industries, as well as funds and high-profile individuals.

The Legal 500 EMEA recommended Mr. van Ermingen-Marbach for Compliance in Germany in the 2019 Edition.

Mr. van Ermingen-Marbach started his career at a boutique firm focused on corporate and white-collar criminal law matters. He then moved to the state prosecutor’s office and spent over ten years in different capacities at the district attorney’s office (Staatsanwaltschaft): During his time as a career prosecutor (2006-2017), he served more than six years (2006-2013) in the department of corporate criminal law and international legal assistance with a focus on a wide array of white-collar criminal law matters and on cooperation with international enforcement offices. He has then spent two years (2013-2015) in handling a high-profile parliamentary investigation involving allegations of fraud against the State of North-Rhine Westphalia in a several hundred million Euro range. After this assignment, he was promoted to serve in the Duesseldorf District Attorney Office designated to handle large and international corporate criminal law cases that exceed the experience and resources of other district attorney offices in the State of North-Rhine Westphalia (Schwerpunktstaatsanwaltschaft für Wirtschaftskriminalität). He spent two years in this role, before deciding to move back to private practice and join one of the most-renowned national firms focusing on corporate investigations and white collar defense matters. In this capacity, he has handled a broad range of white collar matters mainly for corporate clients, some for individuals. These matters involved issues of fraud, embezzlement, corruption, money-laundering and tax evasion.

Mr. van Ermingen-Marbach, in addition to his native German, is fluent in English.