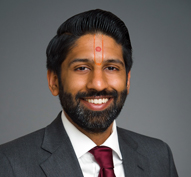 Vinay Limbachia is a litigation associate in the New York office of Gibson, Dunn & Crutcher.  He is a member of the Firm’s Appellate and Constitutional Law, Crisis Management, Securities Litigation, and White Collar Defense and Investigations Practice Groups.