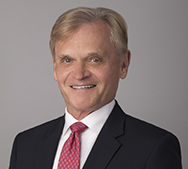 Richard Parker is a partner in the Washington, D.C. office of Gibson, Dunn & Crutcher and a member of the firm’s Antitrust and Competition Practice Group.  Mr. Parker is a leading antitrust lawyer who has successfully represented clients before both enforcement agencies and the courts.

As an experienced antitrust trial and regulatory lawyer, Mr. Parker has been involved in many major antitrust representations, including merger clearance cases, cartel matters, class actions, and government civil investigations.  He has extensive experience representing clients in matters before the Federal Trade Commission (FTC)  and the U.S. Department of Justice Antitrust Division.  His experience in high-profile merger trials has earned him high honors, including being recognized by Chambers USA as a first-tier ranked “Leading Lawyer” in Antitrust, and included on Benchmark Litigation’s 2022 “Top 100 Trial Lawyers in America” list.  In 2021, he was named East Coast Antitrust Litigator of the Year by Benchmark Litigation. Who’s Who Legal named Mr. Parker to their “Thought Leaders: Global Elite” list for Competition every year since 2018.  He has been recognized by the Legal Times, Best Lawyers in America, Lawdragon, and by Super Lawyers Magazine as one of the “Top 100 Washington, DC Lawyers.”  In 2020, The Am Law Litigation Daily named him Litigator of the Week for successfully persuading a federal judge to approve the $26 billion T-Mobile and Sprint merger. In 2014, Mr. Parker was named by Global Competition Review as “Litigator of the Week” and as a finalist for “Lawyer of the Year” for his work as lead trial counsel to US Airways in its merger with American Airlines.  According to GCR, the merger was named “Matter of the Year” “on account of the shrewd, pre-emptive lawyering required to out maneuver lawsuits from a host of antitrust enforcers.”

From 1998 to 2001, Mr. Parker served as the Senior Deputy Director and then as Director of the Bureau of Competition at the FTC.  He joined the firm from O’Melveny & Myers where he served as co-chair of the Antitrust and Competition Practice.

Mr. Parker received his J.D., Order of the Coif, from the UCLA School of Law, where he served as the Comment Editor of UCLA Law Review.  He is admitted to practice in California and the District of Columbia.

*Representation occurred prior to Mr. Parker’s association with Gibson Dunn.