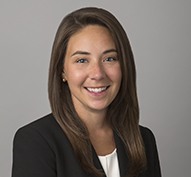 Brittany Raia is an associate in the Washington, D.C. office of Gibson, Dunn & Crutcher.  Ms. Raia’s practice focuses on labor and employment litigation and investigations.

Ms. Raia has represented clients in a wide range of employment litigation matters, including those involving race, age, and gender discrimination and harassment claims, whistleblower complaints, trade secret misappropriation, executive compensation disputes, and breach of contract.  She has handled numerous employment-related investigations, including investigations involving sexual harassment and other #MeToo allegations, other workplace misconduct, and the possible misappropriation of trade secrets.  Ms. Raia has represented employers in single plaintiff and class action litigation at both the trial court and appellate levels, as well as in arbitration and mediation.

Ms. Raia is admitted to practice in the District of Columbia.  She serves on the firm’s Diversity Committee.