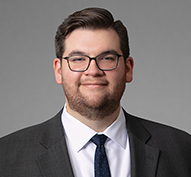 Evan Rios is a litigation associate in the Dallas office of Gibson, Dunn & Crutcher.

Before joining the firm, Evan clerked for Chief Justice Nathan L. Hecht of the Supreme Court of Texas.  Evan  received his J.D., cum laude, from SMU Dedman School of Law in 2021, where he served as President of the SMU Law Review Association, President of the Hispanic Law Student Association, he was a member of the Barristers, and was selected by faculty to receive the Sarah McQuillen Tran Award.  While in law school, Evan served as a member of the First Amendment Clinic, presenting oral argument before the United States Court of Appeals for the Fifth Circuit in a First Amendment-related appeal.  Additionally, Evan served as a research assistant to Professor Jenia Turner.

In the three years prior to beginning law school, Evan taught middle school language arts in Jackson, Mississippi. In 2014, Evan graduated from the University of Texas at Dallas, where he received his Bachelor of Arts in historical studies.

Evan is admitted to practice in the State of Texas.

University of Texas at Dallas - 2014 B.A. Bachelor of Arts